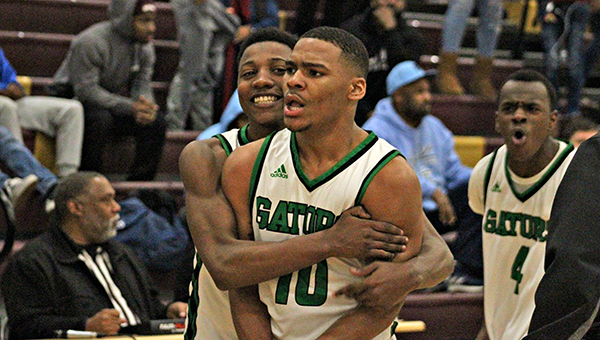 JACKSON — In a game where every point mattered, Peytin Jackson was well aware of how many easy ones he had cost his team by missing several layups and free throws.

At the end of the night, he might have been the only one in the gym who remembered those.

Jackson caught a long outlet pass from teammate Taylon Smith with 3 seconds to go, drove into the lane and hit a reverse layup as time expired Tuesday to give the Vicksburg Gators a 59-58 victory over Ridgeland in the semifinals of the MHSAA Region 4-5A boys’ basketball tournament.

Jackson’s basket was the last of his 15 points, and capped an intense game in which neither team ever led by more than five points. Jalani Bell hit a 3-pointer to put Ridgeland ahead 58-57 with 20 seconds to go, but missed the front end of a one-and-one free throw attempt with 6.3 seconds to go.

Vicksburg grabbed the rebound and called timeout to set up its final chance, with a play that coach Kelvin Carter called one of his favorites. Three players remained in the backcourt while Jackson broke out behind his defender on a go-route toward the basket.

Smith hit Jackson perfectly in stride with a long baseball pass, and Jackson waited until the last possible tenth of a second to shoot. He was nearly past the basket when he released the shot, which banked in off the backboard and through the net.

“I figured that they were going to pressure us at the end, because we’d been throwing the ball to the big man on the sideline the whole game. So I told them to go all the way down and we’ve got the home run. I’ve got my pitcher throwing it in,” Carter said. “I’ve won a lot of games as a player with that same play. I won a Little Six championship in ninth grade with that same play. I just know that if they run it right, it works.”

The basket set off a wild celebration for the Gators (19-8), and with good reason. Not only was it a thrilling buzzer-beater, it set up a rematch with top-seeded Callaway (20-5) in the championship game Friday at 8:30 p.m. at Northwest Jackson Middle School.

It’s the third year in a row that Vicksburg and Callaway have met in the Region 4-5A championship game. Callaway won the first two times. The Gators have only beaten their nemesis — which also happens to be the top-ranked team in Mississippi and undefeated against in-state competition this season — once since 2009.

Tuesday’s victory also charted a far more favorable course through the postseason for the Gators. They’ll get a first-round by in the Class 5A state tournament if they can beat Callaway, or play at home in the first round next week if they lose.

Had they lost Tuesday, the Gators would have had to win the consolation game just to get into the state tournament and then would have been on the road in the first round.

“We don’t have to travel, we’re at home, and we shoot well at home,” said VHS guard Cameron Butler, who finished with 17 points against Ridgeland.