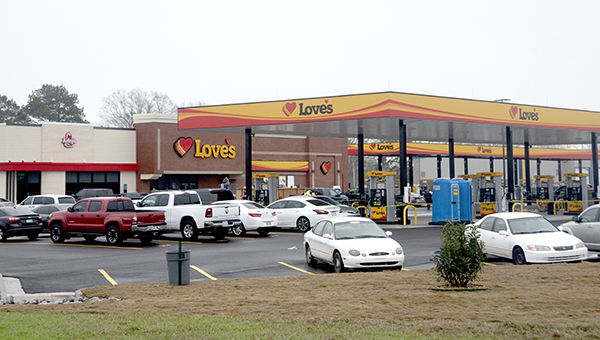 Workers, Wednesday, put the finishing touches on the new Love’s Travel at the Flowers exit on Interstate 20 in Warren County. The center opened Thursday and an official grand opening and ribbon cutting is scheduled for Monday. (Courtland Wells/The Vicksburg Post)

Love’s Travel Stops announced Thursday its new location at the Flowers exit on Interstate 20 in Warren County is now open.

While the official grand opening and ribbon-cutting, in conjunction with the Vicksburg-Warren County Chamber of Commerce is set for Monday at 10 a.m., employees have already started helping customers.

“Today is a big day as we open locations in Virginia, Oklahoma and Mississippi,” said Tom Love, founder and executive chairman of Love’s. “These new locations allow us to serve professional and four-wheel drivers and get them back on the road quickly. We’re excited to continue adding convenient locations to communities across the country.”

In honor of the grand opening, Love’s will donate $2,000 to nearby Bovina Elementary School.

The company also said the facility will employ 72 people.