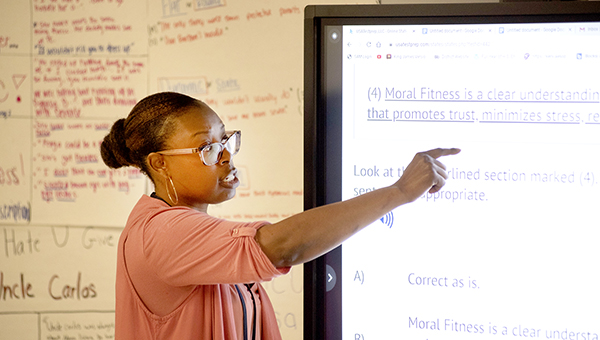 For Theresa Bell, an English teacher at Warren Central High School, her career is not work, but rather destiny.

“I teach because it is the only job God has for me,” she said.

Bell is one of the educators nominated for the Vicksburg-Warren County Chamber of Commerce’s Teacher of the Year awards.

“When teaching a community of students with multiple abilities, cultures, races and socioeconomic backgrounds, it is important to me that everyone feels a sense of belonging,” Bell said in her Teacher of the Year application. “In order for students to learn, they must trust the teacher and the environment by which they are leading.”

During her career, Bell said she has had many memorable moments, but it was when she received a letter from a student on the last day of a school year that meant the most.

“This young man was one who was extremely deterred from school. He was consistently disciplined by teachers and administrators for the first three years of high school and half his senior year,” she writes.

Bell said the student’s grades were average, but his test scores were below average. But that did not change the way Bell looked at the student.

“I often reminded him of the talents and high intellect that he had,” she said. “On the last day of school, he placed a letter in my box with his own personal handwriting. He stated how grateful he was for me not giving up on him even though others had.”

She said the student went on to say it was Bell’s recognition of his abilities that meant the most.

“He continued to say, although he had had a large number of teachers in his life that I was his favorite because I did not see color or gender but I just saw him for him and that he would always remember me,” she recalled.