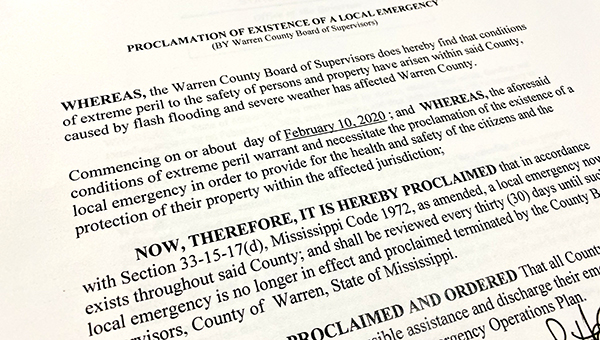 So far this year, Vicksburg and Warren County have experienced nearly 20 inches of rainfall and the county’s roads and highways are starting to show it.

With multiple roads closed and barricades set up on areas of erosion, the Warren County Board of Supervisors declared an emergency aimed at expediting the survey and repairs of some of the most critical road issues.

The proclamation approved Tuesday cites supervisors “find that condition of extreme peril to the safety of persons and property have arisen” with the county caused by “flash flooding and severe weather.”

With this move, county crews and engineers can review what work is needed to address critical concerns, County Engineer Keith O’Keefe said, without having to go through the normal bid process.

“We are going to perform damage assessments on 65 sites, beginning (Wednesday) that we need to look at,” O’Keefe told supervisors. “We will have two teams on it, each team will have a roadway engineer and a geotechnical engineer and someone from road management. We will roll a third team in on Thursday.

“The goal is to have these damage assessments in the next two weeks and then from there estimate the cost, which should take a week.”

While he said there is an assessment and cost-evaluating process with each site, the county’s road department could soon begin work on those areas where they have the ability and equipment to make the needed repairs.

Following Tuesday’s meeting, O’Keefe said damage so far has not shocked him but is widespread.

He called the recent rainfall “historic” and said the damage thus far has been a combination of mudslides and erosion along the shoulders of roads, including destroying pavement in some areas.

O’Keefe said in addition to evaluating the damage and building cost-estimates, the site visits will give he and his team the ability to prioritize the needed work.