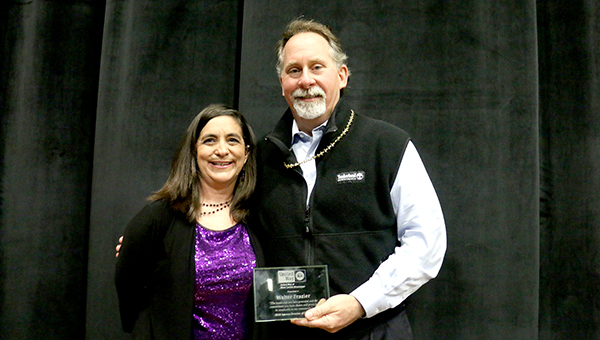 In a year where United Way of West Central Mississippi worked to support hundreds of area residents impacted by severe weather and a historic flood, the agency took time Wednesday to reflect on a year of service and honor those who made it happen.

During the United Way’s annual luncheon, held at the City Auditorium, awards were presented to the volunteer of the year, the agency director of the year and leadership. Scholarships were awarded to two highs school seniors and the annual Spirit of Vicksburg Award was presented.

The agency also took time to celebrate what has been a successful campaign, where it has so far reached 97 percent of its budgeted goal with just 10 days remaining in the campaign.

“There is much to celebrate and reflect upon this past year. The generosity experienced in 2019 was awe-inspiring,” United Way Executive Director Michele Connelly said. “Not many times do I find myself speechless but this past year is very difficult for me to summarize without getting emotional.”

Vicksburg Warren School District’s Connie West, who helped the United Way in continuing to build the Excel By 5 program, was presented the Leadership Award, while Larry Walker, with the city of Vicksburg, was named the Volunteer of the Year.

The Spirit of Vicksburg Award was presented to those who aided in the relief of this year’s historic Yazoo Backwater Area Flood. Warren County Emergency Management Director John Elfer received the award on behalf of those “community heroes.”

International Paper’s Haley Renschler was named the Campaign Coordinator of the Year. Theresa Danczyk and Patsy Counts, both of May & Company, were named Community Investment Committee Volunteers of the Year.

The final award, the Agency Director of the Year, was presented to Walter Frazier of Grace Counseling Center.

I am truly honored to be selected for this award. I particularly have been blessed to work alongside many great people who have responded together in the Warren County long-term recovery committee,” Frazier said. “It is amazing how a disaster or a crisis brings us together, and it has been a pleasure to work with so many people focusing on the same costs. I believe the work we all did together may have a lot to do with this award. I do enjoy working with all the agencies and the staff and volunteers at the United Way.”