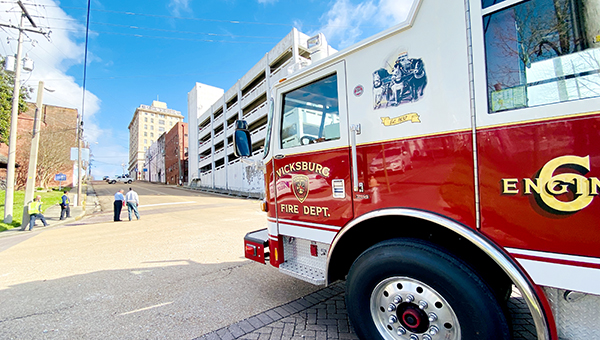 The third and fourth levels of the city’s north parking garage remain closed more than a week after public works department employees discovered a worrisome hole in the middle of the fourth level.

The hole, which was discovered Sunday, Feb. 16, appeared near a seam in the concrete in the middle of the driving lane just as drivers reach the fourth level, which is near the point where a crosswalk connecting the top of the parking garage and Washington Street businesses is located.

Public Works Director Garnet Van Norman said Stantec Engineering has been asked to propose a contract to have specialists not only review the damage in the north parking garage but to also provide a thorough evaluation of both the north and south garages located on Mulberry Street.

“These were built back in the early 70s and basically had not had any maintenance since then and I think it’s time we bite the bullet and do something,” Van Norman said. “[Stantec] is going to get a specialist in here to look at everything, both parking garages. Those things are getting old.”

He said Stantec has personnel within their company who specialize in this area and are pulling together a proposal before moving forward.

“They just need to get a contract together for us and then we can get them going to see what needs to be done,” Van Norman said. “We just need to let these people assess everything. We can’t just keep on.”

He said the third and fourth levels of the north parking garage will remain closed until further notice.

“We’ve had problems over the years, but I just didn’t like what I saw in that damage,” Van Norman said of the hole on the fourth level. “We are going to leave it closed until I can get some people up there to look at it.”