In a letter to Trump, Flaggs requests aid to repair damage at Vicksburg National Military Park 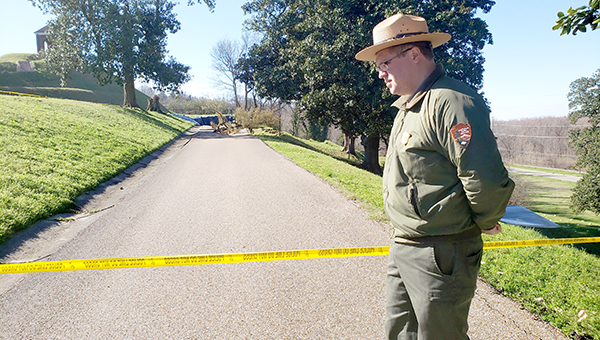 Friday, after a tour of the damage, U.S. Sen. Cindy Hyde-Smith said making needed repairs to infrastructure and roads at the Vicksburg National Military Park caused by erosion and heavy rains would be a top priority.

Monday, in a letter to President Trump, Vicksburg Mayor Geoge Flaggs Jr. called on the federal government’s help to repair what he called “hallowed ground.”

Recent weather, which has brought more than 20 inches of rain to the Vicksburg area since the start of January, has caused havoc to area roads and property, causing mudslides and other areas of massive erosion.

On Feb. 13, officials with the Vicksburg National Military Park closed nearly a third of the park to the public because of erosion issues and damage to key roads in the park.

“Much of the unexpected erosion damage is concentrated in the Vicksburg National Military Cemetery, the second largest military cemetery in our nation,” Flaggs wrote in his letter to Trump. “Graves of our American heroes are in jeopardy — some of which are already covered in mudslides from the natural disaster.

“The area most at risk is an older section of the cemetery where unknown burials from the 1860s took place, and the United States Colored Troops are interred.”

During a tour of the damage open to media just a few days after the damage, Vicksburg National Military Park Director of Interpretation Scott Babinowich said after the assessment of the damage is completed, the next step will involve working with regional National Park Service officials and federal highway officials to assess the damage and develop a plan for needed repairs.

“I prayerfully and humbly request any federal assistance you can provide for these emergency projects in Vicksburg.”