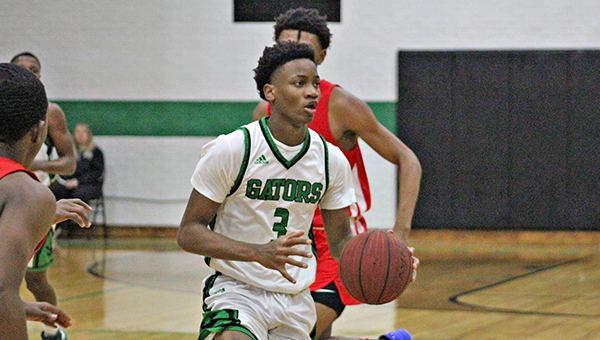 Vicksburg High’s LaCavis Johnson (3) dribbles the ball during a playoff game against Grenada last week. Johnson is one of seven juniors who will return for the Gators next season. (Ernest Bowker/The Vicksburg Post)

Vicksburg High boys’ basketball coach Kelvin Carter is fired up about his program.

He’s got an experienced roster, some promising young players moving up to the varsity level, and plenty of success and momentum to build on.

Unfortunately, he’s got a long wait to see all of it come to reality. About nine months until the next game, in fact.

The Gators ended their 2019-20 season on Saturday, with a 69-60 loss to Center Hill in the second round of the MHSAA Class 5A state tournament. It cut short a potentially memorable playoff run, but hardly dampened the enthusiasm for the program’s progress and future.

“We’ve got tryouts next week. I’m not waiting. We’re going to get right back into it. I’ve got my summer schedule already planned out,” Carter said. “In my mind, I can see my new shoes in the Coliseum going from the 28-foot line to the base line. I’m just ready to get after it. It’s a tough pill to swallow, especially when you have seniors that have bought in like Peytin (Jackson) and Cameron (Butler) bought in.”

Jackson and Butler, who combined to average 26 points per game, are the only two starters that are graduating. Role players Deshawn Douglas and Rickendrick Johnson are also departing.

Jackson scored 25 points on 12-for-16 shooting against Center Hill, and also had five rebounds and three assists. Butler scored 29 points in an 85-50 victory over Grenada in the first round.

The rest of the roster includes Taylon Smith (12.2 points per game), Sean Hardy (5.2 points, 2.8 assists per game) and Jaden Williams (6.1 points, 6.0 rebounds per game), who are among seven players who will be seniors next season.

Another key player, forward Keshawn Brown, tore his ACL early this season and will be back to provide an inside presence.

The Class of 2021 should make the Gators contenders again next season, and a talented group of eighth-graders and freshmen that are coming behind them will ensure the future is bright after that. There was only one sophomore on the roster this season.

“You have guys that got experience that I didn’t think were going to play and get experience in games like Center Hill or Forest Hill or Callaway. Those are building games, as far as confidence,” Carter said. “This time next year, they’ll be totally different players. Lecaris Johnson, Taylon Smith and Keshawn Brown are going to be something to be reckoned with next year.”

Not that this year’s team was any slouch. The Gators reached the 20-win mark for the first time since 2011, finishing with a 20-10 record. Carter said that exceeded his expectations and continued the steady improvement on his watch.

Vicksburg finished 13-17 and 17-11 in Carter’s first two seasons. This year’s squad reached the second round of the state tournament for the second time under Carter.

“It was a wonderful year. It was beautiful because I’ve been wanting this for a long time and to get to 20 wins in my third year, I didn’t really see it coming. I thought maybe 15 or 16. Twenty is big. We’re building. Thirteen-and-17, 17-11 and now 20-10. The future looks so bright,” Carter said. “I’m so excited because I’ve got the bulk of my team coming back. I’ve got seven juniors coming back, and one tore his ACL in the sixth or seventh game of the season.”

Even in the loss to Center Hill, Carter said, he was able to build a bit for the future.

The Gators were called for more than 30 fouls in the game, which sent most of the starters to the bench in the first half. Center Hill went 25-for-29 from the free throw line, while Vicksburg was 2-for-6.

“The foul situation was 34-5. The first half it was 15-3. My whole starting lineup was on the bench in the second quarter,” Carter said. “We shot five free throws for the entire game. We couldn’t touch them.”

Center Hill built a 19-point lead early in the second half. Vicksburg managed to cut it to as close as seven in the fourth quarter, but couldn’t get any closer.

Even so, Carter said the experience gained by his bench and the effort they showed battling back from a huge deficit will pay dividends down the road.

“I had to play some guys that had never even seen the floor,” Carter said. “But it’s a testament to how hard we worked, and we’re going to continue to work.”