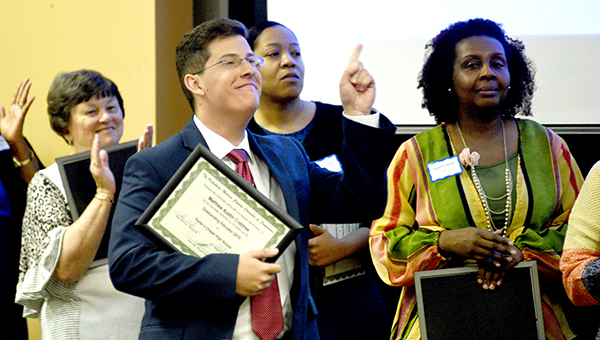 These were just a few of the emotions and reactions shared Tuesday afternoon as the winners of the 2019 Vicksburg-Warren County Chamber of Commerce Educator of the Year awards were announced.

“Our chamber is extremely committed to education, to what our school district is doing, to where every school in our community is going and we want to be there, as a business community, supporting education so it can be the best it can be for our kids and our future,” Vicksburg-Warren County Chamber of Commerce President and CEO Pablo Diaz said. “Teachers, you have a huge job on your hands, and we know that; it’s an important job that you have. You are crafting, molding the future leaders of our community. You are crafting, molding the workforce of the future.”

A total of 21 teachers from schools throughout Warren County — both public and private — were nominated for the honors, with a winner and runner-up being named among the elementary teachers and among those from secondary schools.

Each teacher eligible for the awards had to first be nominated by their fellow teachers and administrators at their schools.

“All of these 21 teachers have won the respect of their peers, and no matter what profession you are in, that is a tremendous honor,” Buddy Dees, chairman of the chamber’s education committee who conducts the awards, said.

“I was not really prepared for this,” Flowers said. “But I just feel like I have been rewarded for the work of so many.”

Flowers is a 3- and 4-year-old early education and special needs teacher at Beechwood.

“It is the very best job in the world. I love my children and get to be the introduction for their parents to school, and so I feel like that is the most important spot to be,” Flowers said.

As for being nominated by her fellow teachers at Beechwood, Flowers said, “I am sure it was quite difficult because we are such a team and there are really no superstars. We hold each other up and I just got to be the one who got held up the highest.”

In being named the top elementary teacher, Flowers receives $1,000 from Ameristar, an amount she already has plans for.

Flowers said she intends to give a little of her winnings to her two assistants and put the rest in the bank for school supplies.

“I was shocked,” Hern, who is a STEM lab teacher at the school, said. “I did not expect this at all.”

Hern said she had “butterflies” in her stomach during the interview process.

“Standing in front of all those judges and drawing questions out of a bucket was nerve-racking because you didn’t know what question was next,” she said, tearing up remembering one of the questions the judges asked. “They asked me the three people that inspired me. I said my parents and my third-grade teacher, Judy Monroe. She read to us every day after recess, so now I read to my kids every day,” Hearn said.

Hern received a $500 check from Mutual Credit Union for being named runner-up.

“This just shows God’s will for my life. He has chosen this path for me,” Crabtree said after receiving the award. “I’ve been called by God to impact the next generation of leaders. This just reaffirms what that means to me and God’s calling in my life.”

As for the $1,000 prize from Ameristar, Crabtree knows exactly where it will go.

“I am going to give some back to the choral program at Porter’s Chapel, which is alive and well; we’re going to Universal Studios in a few weeks,” he said. “We can put it toward that and for some scholarships for some students who might not be able to afford to go.

“I cannot find the words,” Bell said after the receiving the award and a $500 check from Mutual Credit Union. “Teaching is so rewarding so to be recognized for it is not something you look for every day. This is just unbelievable. I am elated. I don’t have the words.”

As for the money, Bell said it would likely be put back into something for the classroom. “We always have things that we need there,” she said.

Tuesday’s event marked the 31st annual education awards by the chamber and Diaz said it is something he and the chamber take very personal.

“We can all think of those teachers that really made a huge difference in our lives, or saved us from going the wrong way,” Diaz said. “I can remember going through fourth grade, fifth grade, sixth grade now thinking back if that teacher had not done that, said that, sat me down, things would have been different. This is extremely important, and personal, that this chamber recognizes you.”