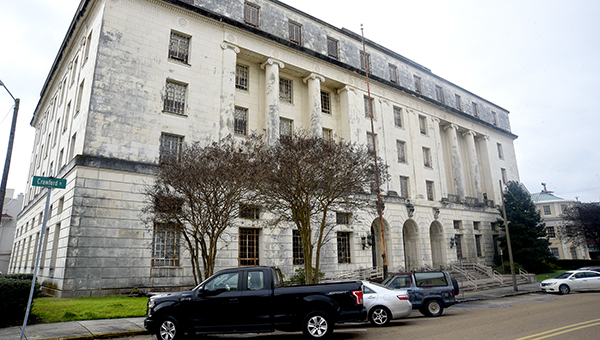 For Shirley Waring, the sight of roofing crews working on the former U.S. Post Office and Federal Courthouse in downtown Vicksburg is good to see, even if what they are doing is a temporary project.

Crews began spraying a temporary roofing material on historic building’s roof to better protect the structure from water damage, as Waring and her team with Delta Court LLC continue behind the scenes work of developing the iconic downtown structure.

“This won’t be the permanent roof because we have several obsolete features on top of the building that will need to be removed,” Waring said. “They will work from sun up to sundown. They will be done Sunday.”

The city’s traffic department helped by placing safety structures in barricades near the building that blocked access to the public parking on Crawford Street and an area behind the building used by city employees.

“I really want to thank the city, particularly W.L. Sanders with the traffic department, for their tremendous help,” Waring said. “They have been great to work with.”

Waring said windscreens were also installed to capture any overspray from the teams applying the roofing material, which calls for a foam-spray application.

The 70,000 square-foot facility, located at 820 Crawford St, was purchased by Waring’s group in 2006 after Hurricane Katrina. Waring is a co-owner and managing member of Delta Court LLC.

“I am especially happy to have something that is visibly happening on the building,” she said. “We have been busy working behind the scenes for many years on planning and analysis. Good to see something physically happening.”

Waring said the parking areas currently blocked off are scheduled to be opened up before Monday.