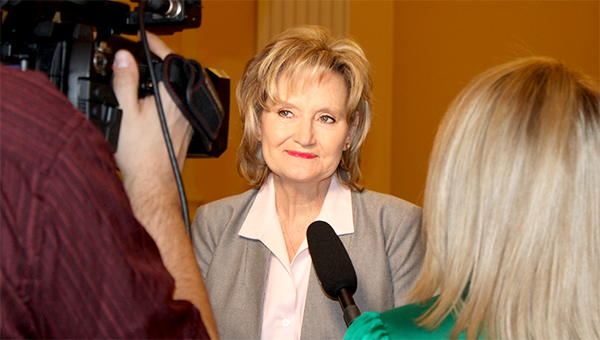 Wednesday, U.S. Sen. Cindy Hyde-Smith said she received a personal commitment from Interior Secretary David Bernhardt that the U.S. Department of the Interior is “100 percent there” to undertake urgent repairs to the storm-damaged Vicksburg National Military Park and Vicksburg National Cemetery.

During the hearing, Hyde-Smith described how more than 23 inches of rainfall over the past months has caused severe soil erosion, road collapses and damage to 64 gravesites of United States Colored Troops and other unknown burials from the 1860s. Officials with the Military Park reported in mid-February that nearly one-third of the park is currently closed to visitors.

“I visited the park personally on Feb. 21 and was astonished by the magnitude of damage, and the way those graves have just slidden into piles of mud,” Hyde-Smith said.

“The Vicksburg Military Park and National Cemetery are vital parts of American history and so important to the local economy, but more so those graves have been disturbed,” she told Bernhardt.  “I’m just asking for your commitment. Will you commit to me that you will explore all available resources within your Department to address the damages at the Vicksburg National Military Park and Vicksburg National Cemetery as soon as possible?”

“Resources are focused on it,” he said. “It’s obviously a very dynamic situation right now, but we are 100 percent there and we will be there. And I will personally work on it. We have a big interest in making this right, too.”

The National Park Service Eastern Incident Management Team has been on site since March 1. It is working with the Federal Highway Administration to begin damage assessments.

Hyde-Smith’s announcement comes just one day after meeting with a delegation of business and governmental leaders from Warren County who are in Washington meeting with members of the state’s congressional delegation.

During a meeting with the group Tuesday, Hyde-Smith updated the status of the federal government’s response to damage at the park and cemetery. She also meet individually with Vicksburg Mayor George Flaggs Jr. Wednesday, who provided additional insight into the damage at the park, and other areas of Vicksburg and Warren County severely damaged by massive rainfall and flooding.

“She confirmed to me that she had spoken with the Department of the Interior and reiterated that she would expedite this matter,” Flaggs said. “I commend Sen. Hyde-Smith for staying on top of this matter and I continue to encourage our congressional delegation to look at the totality of the cost of the devastation of sliding and infrastructure issues in Vicksburg and Warren County.

Both Flaggs and representatives from the county have provided some initial estimates of the damage in the area.

“They have been very receptive,” Flaggs said of the members of the congressional delegation the group has met with. “They have expressed interest in looking at possible emergency funding to address some of our issues.

“That is just one more reason why I have said this trip has been tremendously productive and again say that relationships matter.

Wednesday’s hearing in Washington with Bernhardt was the first the Senate Interior Appropriations Subcommittee will conduct to review FY2021 budget requests for the Department of the Interior, the NPS and other agencies, like the Environmental Protection Agency.

Bess Averett, executive director of the Friends of the Vicksburg National Military Park and Campaign, said Hyde-Smith’s comments were welcomed news. Averette is part of the group from Warren County meeting with congressional representatives in Washington.

“The support of Sen. Hyde-Smith and the entire Mississippi delegation we met with this week is very assuring,” Averett said. It is clear they value and prioritize our needs and understand the urgency of our requests.

“All of the Vicksburg National Military Park is hallowed ground, but especially the National Cemter,” Averette said. “I’m proud of the commitment of our elected officials to our park.”