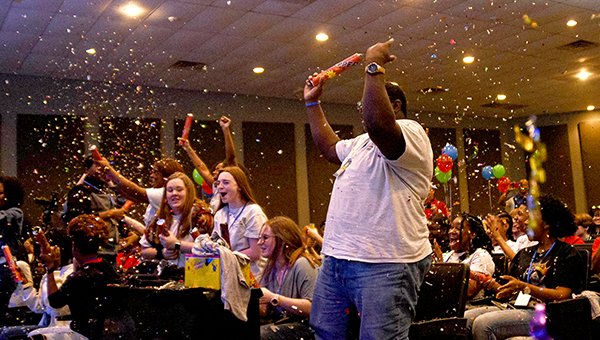 River City Early College High School students celebrate after the school was named among the first Leader In Me high schools to be named a Lighthouse school. The announcement during a special event Friday at Triumph Church. (Courtland Wells/The Vicksburg Post)

It’s not every day that an assembly of high school students involves an indoor percussion team, inflatable globes and dozens of confetti cannons. Then again, it’s not every day students learn they are among the first in the world to reach a goal.

Friday, with students and administrators looking on, and with members of the businesses and economic development community in attendance, River City Early College High School was named one of the first high schools in the world to achieve Lighthouse School status; a prestigious accomplishment for those schools part of FranklinCovey’s Leader In Me program.

“We are thrilled to recognize River City Early College High School as a Leader In Me Lighthouse School,” Sean Covey, president of FranklinCovey Education, said through a live stream broadcast to students gathered at Triumph Church. “Schools who achieve this Lighthouse certification are great examples of a strong leadership model and process, and of what it means to be a Leader in Me school. This school has experienced transformational results by implementing the principles and practices related to Leader In Me. And we are pleased and honored to celebrate the success they are experiencing.”

Friday’s announcement was a first for FranklinCovey and the Leader In Me Program.

According to the company, more than 300 schools — of the nearly 4,000 schools around the country that have incorporated the Leader In Me program — have earned Lighthouse certification. But Friday’s announcement was the first time high schools have earned the status.

Also on Friday, a high school in Oklahoma was awarded Lighthouse status, making the two schools the first high schools in the world to reach that level.

The accomplishment reached Friday is yet another milestone for the Leader In Me initiative in the Vicksburg-Warren School District that began more than eight years ago.

The Leader in Me was first sponsored in the schools by the Vicksburg-Warren County Chamber of Commerce in 2012. It has since expanded into all schools and touches every student in grades Pre-K through 12.

Four other schools in the district have earned Lighthouse certification; the Academy of Innovation and Bovina, Bowmar and Redwood Elementary Schools.

“All we did was plant a seed. That’s what we did now nine years ago,” said Brother Blackburn, who was among the area business leaders who worked through the Vicksburg Warren County Chamber of Commerce nine years ago to begin gathering the funding to implement the Leader In Me program in the Vicksburg Warren School District. “And look at what it has grown into. Unbelievable. We planted the seed and y’all did the work. Congratulations to you all.”

Blackburn and Bob Morrison, who was also part of that original group, said Friday’s announcement was surreal.

“It’s unbelievable. Truly unbelievable,” Blackburn said. “We started out with the idea that we wanted our schools to be the attractor rather than the detractor. We were thinking of regionally. We were not thinking of the world.”

“I am not surprised in the least,” Morrison said. “The vision was, when they started here, when they finished, that they would be ready to take on the world. Could compete anywhere in the world. I bet you everybody in River City Early College could.”

Funding for the Leader In Me program has been built throughout the years through private donations, commitments and matches through government programs; an investment Blackburn said is providing a tremendous return.

“It has been an incredible return on investment. That is what’s happening right now. It is paying off today,” he said. “That is the reason we chose this program when we first decided on what we wanted to do to help our schools. We didn’t want to get into the academic business, where we were going into the classroom telling you what to do with the curriculum. All of us wanted to build that character, that goal setting, that accountability; those are life skills and incorporated into the culture of the school. That is what this is. It’s a culture.”

After making the announcement Friday, FranklinCovey’s Wes Bender said by being named among the first two Lighthouse Schools, River City Early College is now an example for others.

“A lighthouse warns and guides. You guys are a warning right now. You have officially become a warning for those who are in positions of influence and power not to set the bar too low for today’s youth leaders. The shore of leadership is closer than we as adults realize,” Bender said. “You guys are also a guide for those who are out there trying to make it happen. You are a beacon of hope. You are a clear, concise and compelling example of pure outstanding awesomeness.

“River City, you have changed the game,” he said.

The Leader In Me program is based on Stephen Covey’s Seven Habits of Highly Effective People and is a framework, officials with the district said, that helps schools achieve results by influencing behaviors and paradigms.

“Leader In Me has provided a sound foundation on which to build on. It has given our students access to important leadership skills that they can apply to any situation they encounter,” Vicksburg Warren School District Superintendent Chad Shealy said. “Being the first Lighthouse high school in the world is quite an accomplishment and I credit the hard work by the staff, students and parents at RCEC.”

“I have bragged on you guys, literally to everyone I meet,” Shealy said. “Y’all deserve this more than any group I know.”

“The Lighthouse certification is evidence that schools have produced outstanding results in school and student outcomes, by implementing the process with fidelity and excellence,” the district said in a press release. “It is also because of the extraordinary impact that the schools may be having on staff, students, parents, and the greater community.”

The announcement also strengthened the selling point business and economic leaders use to show how Leader In Me is changing education in Vicksburg and Warren County.

“This announcement today is a very big deal, a very big deal in economic recruiting when you are recruiting a company — it’s not about showing you have all the problems solved — but that you are taking action to solve the problems and to make your community better and making it the best it can be; especially as it relates to building a great workforce,” Vicksburg Warren Economic Partnership President and CEO Pablo Diaz said. “In my experience with the projects we have won for Vicksburg, when we explain what Leader In Me is and what it is doing in setting the foundation for our workforce of the next 20 years, it just opens up the gates to a really in-depth conversation about the value system of our community as it relates to education.

“At that point, those we are talking to get it. It’s no longer about the statistics, or the numbers I am showing, it is about the philosophy and the community-wide motivation to do the right thing for our students that translates into the workforce,” he added.

Diaz said that while Leader In Me has been positive in attracting new businesses and industries, Friday’s announcement of River City Early College’s Lighthouse status is yet another plus.

“To have it at the high school level it is fantastic because we have been talking about what is being done in the elementary schools so that we set the workforce of the future, but now we are right here, teaching this to those who are the workforce literally next year,” he said.

Diaz, who in his role as the Partnership’s president also oversees the Vicksburg Warren County Chamber of Commerce, was instrumental in pulling the business community together to build funding for the Leader In Me program.

“When the chamber moved to do this it was visionary. We are lucky to have the business community we have that actually saw the potential and now we have this program across our school district,” Diaz said. “We want to push this forward. Anyone should always want to read and learn about leadership. There’s nothing that is not positive about learning about leadership. And to have our entire student body doing that on a daily basis is inspirational.”

For River City Early College Principal Tammy Burris, the announcement Friday was special especially since she was principal at Bowmar Elementary School when it was named a Lighthouse school in 2015.

“It is so special. I tell elementary school teachers all the time that they are planting the seeds in elementary school and now I am on the other end of that, with some of the same students,” she said. “We get to reap the benefits of those who are teaching Leader In Me at the elementary level.

One of those kids, MaryKatherine Archer, a sophomore at River City Early College, said earning the Lighthouse school status was the result of hard work.

Archer said the recognition from FranklinCovey was special, but not as special as the atmosphere at River City Early College and the “family” that exists at the school.

“Family and relationships are so important, they make such a difference in our high school environment,” she said. “People think that relationships and being close to your teachers and having that student-teacher relationship is just something that should be going on just in elementary schools and that it is not as important at high school because we will be gone in four years. I think that it is even more important because we are going to be gone in four years. We need to learn these life skills.”