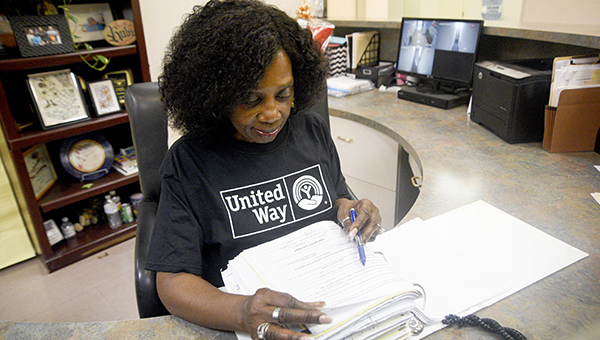 Completing a campaign where you are trying to pull together funds to support the programs of 17 partner agencies and more is hard enough. Doing it during a year when a large segment of your coverage area is dealing with a devastating flood makes it nearly impossible.

Combined with the giving spirit of thousands of contributors, the spirit of countless volunteers and a community that rallied to support its mission, the United Way of West Central of Mississippi not only came within just a few hundred dollars of meeting its annual campaign goal but raised more than $115,000 to support the recovery efforts of those who were dealt a serious blow because of last year’s historic Yazoo Backwater Area flood.

During a meeting Tuesday of the United Way’s board of directors, board members approved the allocation of more than $650,000 to programs coordinated by the United Way’s 17 partner agencies and other United Way programs and initiatives.

In the end, the United Way’s annual campaign — which began with the Supper on the ‘Sip in September and concluded at the end of February — reached 99.7 percent of the goal; “or 100 percent because we’re rounding up,” campaign co-chair Lynn Foley said.

It marked the first time in a number of years the United Way has come close to reaching its campaign goal.

“I am sincerely overjoyed with the success of our 2019 United Way campaign. We had a phenomenal team who worked diligently and tirelessly to keep putting the ‘Fun’ in fundraising,” Foley said. “And, all the hard work, dedication, and obvious passion paid off as we are celebrating reaching our goal for the first time in many years.”

Michele Connelley, executive director of the United Way of West Central Mississippi, said Tuesday the success of this year’s campaign was due to the volunteers and staff who drove the campaign, and the community who rallied behind the mission of the United Way.

In addition to pursuing a goal in excess of $650,000, the United Way’s staff and campaign committee were also challenged to raise money in support of the relief effort of the backwater flood, a mission that continues today.

In the midst of the campaign, Connelley said the community rallied to both the campaign and the disaster relief because of the United Way’s track record of not only serving the community, but being there when disaster strikes.

“I am a true believer that the United Way of West Central Mississippi is called to do what the community needs for us to do during a crisis. Whether that is during a natural disaster or whether that is during a crisis with an individual, or a family, or the community as the whole for whatever it may be,” Connelley said, adding the mission of supporting the partner agencies and their programs never took a back seat to the disaster relief. “As we were out in the community raising funds for the campaign, we were simultaneously raising $115,000 for disaster relief. We were able to do it because we have 67 years of rich history here in our community and people have trusted to build the capacity necessary for us here in this office to do what we need to do when we are called to do it.”

Despite the best of plans, staff and volunteers, Connelley said there was a concern attempt to raise critical dollars for two needs — one the campaign and the other disaster relief.

“Was I nervous? I am not going to lie knowing that we were called to raise more than we raised last year and called to raise enough to meet the immediate needs of those affected by the disaster at the same time. I was very scared one was going to suffer because of the other. I was,” she said. “At the same time, west central Mississippi proves me wrong all of the time.”