Chief of Engineers on backwater pumps: It’s time to make something happen 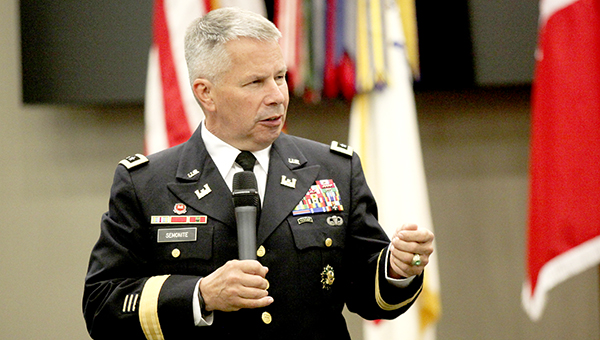 U.S. Sen. Cindy Hyde-Smith Wednesday prompted strong commitments from the leadership of the U.S. Army Corps of Engineers to “push this process through” to complete the Yazoo Backwater Area flood control pumps.

Hyde-Smith received pledges from R.D. James, Assistant Secretary of the Army, and Lt. Gen. Todd Semonite, Commanding General and Chief of Engineers, to move forward with a long-sought pump station that would help protect the South Mississippi Delta from “perpetual flooding.”

“We simply cannot sustain this flooding.  Instead of carrying out a long-term solution specifically authorized by Congress, we continue to spend tax dollars on damages and repairs, which could have otherwise been prevented,” Hyde-Smith told James and Semonite at the Senate Energy and Water Development Appropriations Subcommittee hearing Wednesday afternoon. “Assistant Secretary James and Lt. Gen. Semonite, would you agree that flood control projects are not fully effective until they are complete?”

James, familiar with the region through his previous work with the Mississippi River Commission, responded, “Absolutely, I’ll agree with it because they’re not effective and yet when we do finally get around to complete them, they cost us four to five times more than they should. And all that time the people that need that flood control project are suffering.”

“The bottom line here is we are going to push this process through, so NEPA should be good to go. We are using our Work Plan money. The Corps’ position is these pumps are absolutely essential,” Semonite said. “It might be a good time that you, the head of the EPA, Secretary James and I get in a room and say ‘how do we move forward,’ because we have been dealing with this problem way too long and it’s time to make something happen.”

Hyde-Smith used the FY2021 budget review hearing to argue Mississippians and taxpayers continue to be harmed by the failure of the federal government to complete all flood control components authorized under the Flood Control Act of 1941.

The Yazoo Backwater pumps represent the last, unmet federal commitment to help protect a 630,000-acre region in the South Delta.

As part of a comprehensive review of past and current situations in Mississippi, Hyde-Smith expressed gratitude for recent efforts by the Army Corps and the Environmental Protection Agency to overcome a 2008 EPA decision that stopped completion of the Yazoo Backwater project.

“A pumping station would not have completely prevented the effects of last year’s flood or prior years’ flooding, but the damages would have been drastically reduced,” Hyde-Smith said. “Thanks to your great leadership and your strong leadership under this Administration, area residents now have hope.”