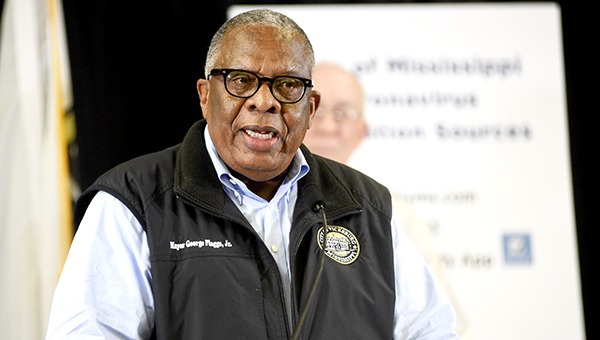 A new set of restrictions for the city aimed at reducing the spread of COVID-19 went into effect at noon Monday.

Mayor George Flaggs Jr. announced the restrictions at a Sunday press conference at the Vicksburg Convention Center. He said they are part steps available city officials as part of the civil emergency declared by the Board of Mayor and Aldermen March 18.

The restrictions will run for 14 days, he said, adding city officials will review the plan at that time.

“This is the second phase of the civil emergency,” he said. “The third phase is shelter in place. I’ve spoken to the governor’s office, and I’m in constant communication with the chief of police, the fire chief, the sheriff, (Board of Supervisors President) Dr. (Jeff) Holland and Emergency Management.

“I have expressed to the governor that I will not put it in place unless he gives me the authority,” Flaggs said. He said his staff was working on the plans for lockdown, which will be a stricter policy.

“It’s no more business as usual,” he said. “This is designed to minimize death and for the health, safety, welfare and protection of the general public. I’ve already signed the order.”

• Social distancing should be enforced throughout the city. Stay at least 6 feet away from others to the extent possible.

• A citywide curfew will be strictly enforced from 11 p.m. until 5 a.m. People should stay off public streets or in any public place unless traveling to or from work or for medical workers in the performance of their duties. First responders and law enforcement are exempt.

• During the emergency, funeral services are recommended to be held on the property of a funeral home or in the city of Vicksburg Auditorium. All funeral services shall be at 11 a.m. or 2 p.m., with a strictly enforced 50-person limit, for the next 14 days.

The use of the city auditorium will allow space for social distancing and will be available for funerals at no cost during this civil emergency. Any repast or other meal will not be allowed at the auditorium.

• Most places that have public assemblies such as theaters, churches, places of entertainment and other places where the public gathers from time to time have already adopted policies of closing or limiting the number of persons allowed inside at the same time.

• Bars, nightclubs, lounges and taverns shall close, but may only provide take-out, pick-up, delivery, or drive-through services for food as allowed by law.

Restaurants and private clubs shall close dine-in services, but may provide pick-up, curbside service, delivery or drive-through services for food as allowed by law. There shall not be more than 10 employees and 10 customers inside those businesses at any one time. The establishments must close by 11 p.m. and remain closed until 5 a.m.

• Liquor stores shall provide curbside delivery only and have no more than 10 employees inside at any one time.

• Barber and beauty shops and nail salons/spas shall not have more than 10 employees and 10 customers inside the business at any one time and shall close at 6 p.m.

• Meals for seniors age 65 and older will be available at the Salvation Army on Mondays, March 23 and March 30, and Tuesdays, March 24 and March 31, for curb-side pickup, and at the Jackson Street Center for curbside pickup on Wednesday, March 25, and the Vicksburg Convention Center Wednesday, April 1 – Friday, April 3.

Curbside pickup will be available at these locations between 11 a.m. and 2 p.m. A photo ID confirming age 65 or older must be provided.

• The measures detailed in this proclamation (other than those referring to places that are venues of public assembly) apply only to the specific businesses listed.

• Violation of the new regulations is subject to misdemeanor prosecution and up to a $1,000 fine.

The Phase 2 restrictions come as the Mississippi State Department of Health announced Sunday there are 207 confirmed cases in the state. As of Sunday, there were no confirmed cases of COVID-19 in Warren County according to health officials Sunday.

The Post has confirmed multiple tests have been administered in Warren County and submitted to the state for testing. The Mississippi State Department of Health does not provide county-by-county breakdowns of the number of tests taken as of yet.

Flaggs said after the press conference he believes businesses and organizations in Vicksburg are exercising precautions to reduce the spread of COVID-19.

Funerals, he said, “Are touchy, because that member of that family died one time, and they’ve got friends out there in Vicksburg and as many as 12 or 13 in their family, so that’s (restricting funerals to 10 people) counterproductive. The funeral homes are adjusting.”

Flaggs was expected to meet with funeral directors Monday.

He said some churches in the city have continued to meet, adding beginning Monday church services will be limited to 10 people and the pastor will be held in violation.

“Everything I’m doing is having to do with the safety and welfare of the people, and I’m going to leave it up to the governor and the Congress to look at the economic impact of it (the virus),” he said.