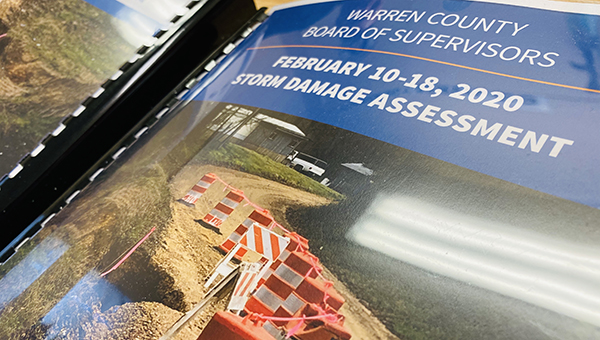 Warren County Board of Supervisors reviewed an assessment in late March of the damage caused by heavy rains earlier this year on county roads. (Tim Reeves/The Vicksburg Post)

In a report presented Tuesday by county engineer Keith O’Keefe, supervisors learned just how much the damage caused by historic rainfall early in the year did to many to the county’s roads.

During a meeting at the Warren County Emergency Management Agency, O’Keefe laid out the damage to 47 sites throughout the county that came with an estimated repair cost of $10.4 million.

In that report, the largest project involved the damage at Redwood Road that has caused the major northern county thoroughfare to be closed since mid-February.

Mudslides and a partial collapse of the road have forced traffic to reroute around the damage and forced county work crews to remove much of the debris; a process that has been slowed by repeated slides of a nearby hill.

That project alone, if estimates from O’Keefe and Neel-Shaffer Engineering are correct, would cost $2 million.

The challenge now for the Warren County Board of Supervisors is to determine how to pay for the needed repairs and where and how to seek reimbursement from federal and state outlets.

Given some of the roads are roads maintained through federal dollars, there is an expectation that funds from the Federal Highway Administration could be used with some costs being reimbursed to the county 100 percent, while others might require a 20 percent match from county funds.

There is also a timetable for much of the work to be started and completed in order to receive reimbursed funds.

Of the 47 sites detailed, 17 of those sites, O’Keefe said, are of a size and scope that the county would need to bid the work out to other contractors while the remaining 30 could be completed by county crews, some of which are already underway.

Redwood Road is a unique project, because there may be a need for the county to increase personnel and crews on the site in order to complete temporary repairs to reopen the road before a project to completely repair the damages could be bid out to a contractor.

Federal Highway Administration guidelines restrict the county from bidding out the temporary work to a contractor and then bidding the overall repair projects to a second contractor. In order to hope and expect full reimbursement for the project, the county could only bid the project once, leaving county crews to make temporary repairs.

Some ideas discussed during the meeting included increasing the number of people in the county’s road department by temporarily hiring more personnel, but that would take weeks if not months given the hiring and screening processes in place.

Another idea discussed was to shift a vast majority of the county’s crews onto the Redwood Road site to get it reopened, and bid out some of the other jobs to contractors. That would also allow the county to seek reimbursement for not only the work contracted out, but also any county resources used to get Redwood Road reopened.

The supervisors’ next official meeting is scheduled for Monday, April 6, where some of these options and decisions could be decided and authorized.