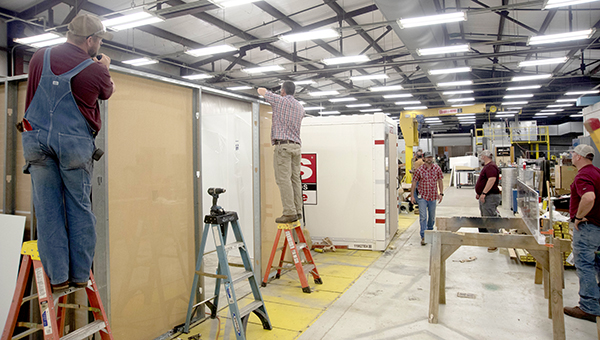 As outbreaks of the COVID-19 worsen, medical facilities in some of America’s largest cities are reaching capacity and government leaders are looking for creative solutions.

And when creative solutions to problems are needed, one of the groups most often called upon is the U.S. Army Corps of Engineers.

In recent weeks, the Corps has developed ways to convert hotels in metro areas into temporary hospitals and convert large convention centers, such as the Javits Center in New York, into facilities that can house hundreds of patients; both those dealing with the virus and those who are not.

The third and fourth options the Corps is exploring to fulfill that mission now involve a team from the U.S. Army Engineer Research and Development Center in Vicksburg.

Monday, Commanding General of the U.S. Army Corps of Engineers Lt. Gen. Todd Semonite, called on ERDC and its Directorate of Public Works to build two prototypes of hospital rooms that could be quickly built and installed in facilities throughout the country.

The two prototypes — one built from scratch, using a metal-framed construction, and the other converting an existing POD storage unit — were designed by the U.S. Army Engineering and Support Center in Huntsville, Ala. and sent to Vicksburg for construction and testing.

The only catch was the team in Vicksburg had just 24 hours to complete their mission.

“It’s a pretty quick timeline, but these guys will get it down. No doubt,” said Mike Channell, director of the Installation Support Division. “We’re looking at the feasibility, deciding which is the easiest and quickest to do. We’re trying to come up with a one-bed occupancy room that they could put into an indoor facility, like a coliseum.”

Channell said it took him about an hour to gather his team and develop a plan on how to complete the project. Once they gathered the needed materials, the crews went to work on both the metal-framed room and retrofitting the storage pod.

They continued work until 10:30 p.m. Monday and returned to work Tuesday morning and by early afternoon, both prototypes nearly completed.

The two hospital room prototypes are designed to accommodate one patient and can be used for both COVID and non-COVID patients. The ventilation system installed for each room will provide negative pressure, a necessity when dealing with an airborne virus.

The storage unit room is an 8-by-16-foot room, while the metal-framed constructed room is designed to be a 12-by-12. Both are designed with plexiglass doors, and areas around the door to allow centrally-located nursing stations to be able to easily view patients.

Semonite, who is no stranger to the personnel and capabilities at ERDC, and who last year toured the very workshop where the prototype work was being done, specifically called on ERDC when the Federal Emergency Management Agency called for plans to be developed.

“(Semonite) said, ‘I want the power of ERDC — I’ve seen your (Directorate of Public Works), and I know they can do it’,” ERDC Commanding Col. Teresa Schlosser said, recalling her phone call with Semonite Monday. “The call went out, and DPW came running.”

The public works team is made up of electricians, carpenters, welders and other trade workers who typically support research and make sure equipment and facilities on station operate smoothly.

“These are world-class tradesman,” ERDC Director David Pittman said. “Gen. Semonite knows our brilliant capacity to do this kind of stuff. These guys are very, very good at these types of projects. If anybody can do this, this quick, these guys can get it done.”

Pittman said taking the project from design to reality, working out any construction problems and putting together the best possible plan for others to use is what the ERDC team is achieving.

“We are building these prototypes to show FEMA, show the world what is possible,” Pittman said. “These have never been done before.”

After the prototypes are completed, ERDC is working with Hometown Medical to place actual medical equipment in the rooms. This will allow the team to take photographs of how the rooms could best be set-up.

“The relationships we’ve built in the community really continue to help here, too,” Schlosser said. “We have a local medical supply company helping us get this done because of those relationships. That coming together in a disaster is particularly rewarding.”

For Channell’s team, he said there was a sense of pride to help with the response to the pandemic and communities and hospitals deal with those battling the virus.

“They were really excited to get back to work and get this job done,” Channell said, adding the team was not working before getting the call Monday because of shutdowns ordered due to virus concerns. “If this proves to be successful, and they are able to get these built out and across the country, it will ease a lot of the burden on hospitals.

“There is a sense of pride for these guys. I’ll brag on them and say that we probably have the best-skilled labor that you can have out here — from machinists to welders to model makers,” he added. “They can make anything you want. A lot of times they work off the back of a napkin. Somebody comes up with a design and they come down here and they can build it, tweak it and make it work.”