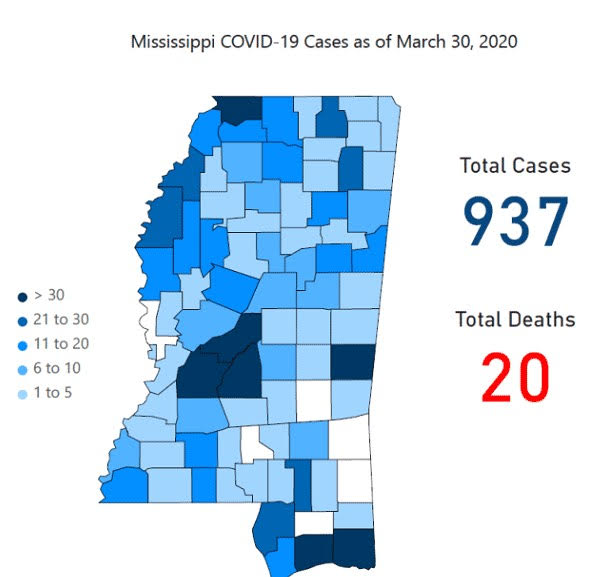 Tuesday, the Mississippi State Department of Health reported 90 new cases of COVID-19 in Mississippi, bringing the total number of cases reported to 937.

There have been no new confirmed cases in Warren County since Sunday. So far, only one Warren County resident has tested positive.

The state also announced the number of virus-related deaths now stands at 20.

MSDH reports cases based on a patient’s physical address, as opposed to the county of the facility that conducted the test.

As for testing, local healthcare providers are conducting tests on those who are symptomatic and who have been initially screened.

The guidelines for testing remain the same. Those who are showing symptoms of COVID-19 — a fever of 100.4 or higher, upper respiratory issues like coughing, wheezing and/or shortness of breath, if a patient has been directly exposed to someone who has tested positive, traveled, been out the country or visited one of the areas defined by the Centers for Disease Control as an area of concern — and who have gone through an initial screening will be tested.

Health officials urge the community to no go to the hospital’s emergency room if you are feeling symptomatic, but instead contact your healthcare provider first.