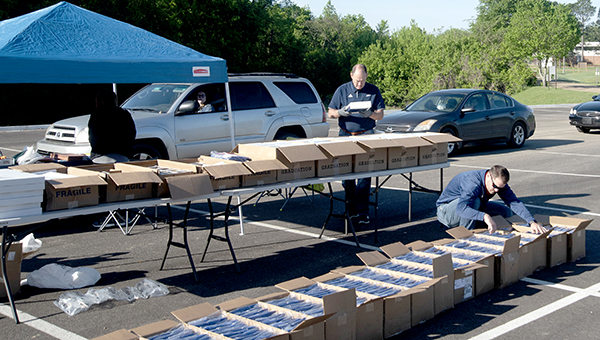 Phil Tally, standing, and Kyle Tally, with Talley Student Services, a representative of Josten’s, coordinate the distribution of caps and gowns for seniors Tuesday at the school. (Courtland Wells/The Vicksburg Post)

Usually Phil Tally would have set up a booth in the hallway of either Vicksburg High School or Warren Central High School to hand out caps and gowns to graduating seniors.

But, this is not a usual year.

Instead, Talley, who owns Talley Student Services, a representative of Jostens, is handing out caps and gowns to seniors in the school parking lots. Many of the students don’t know if they will ever get to wear them.

“It’s been really tough trying to figure out if we are going to have a graduation; waiting to see if we are going to do it or not,” Vicksburg High School senior Kameren Batty said as he drove through the school’s parking lot Wednesday to pick up his cap and gown. “It is kind of a bittersweet situation because, throughout the school year, we had been talking about how we were all ready to get out of school permanently and now that we are, we don’t like it.

“You never know what you’re missing until it’s gone.”

For Cassidy Lampkin, a senior at Warren Central, the final few months of her senior year have not been anything she would have wanted or expected.

“It’s not what I wanted for my senior year,” said Lampkin, who wants to attend Hinds Community College and major in nursing after high school. “I wanted to walk across the stage, have my last prom. But, I guess that was not the Lord’s plan.”

Those who drove through the parking lots Wednesday to pick up their caps and gowns still have big plans for those finishing their high school careers.

“I was looking forward to him walking across the state and we may not have that,” Louise Tucker, whose son, Georgdarius Tucker is a senior at Warren Central, said as she picked up his cap and gown. “He has a big family on my side, and on his dad’s side; and his auntie goes above and beyond. She loves her nephew.

“We were all really looking forward to it, but we are still going to make a big deal about him graduation. We sure are.”

As for Batty, he said his parents have already said the cap and gown will be put to use.

“Even if we don’t get to walk across the stage, we are definitely going to use our cap and gowns for something,” Batty said. “My parents said we are going to have our own graduation in the backyard, or use it to take pictures and post them to Facebook.”

Tally works with 80 schools throughout Mississippi — all of which remain closed due to an order from Gov. Tate Reeves. Tally has been working with them to make sure each of the seniors get their caps and gowns, and ultimately get their diplomas.

As for graduation ceremonies planned for both schools, officials with the Vicksburg Warren School District have not announced if and how those ceremonies will be conducted if schools remain closed through the remainder of the school year.