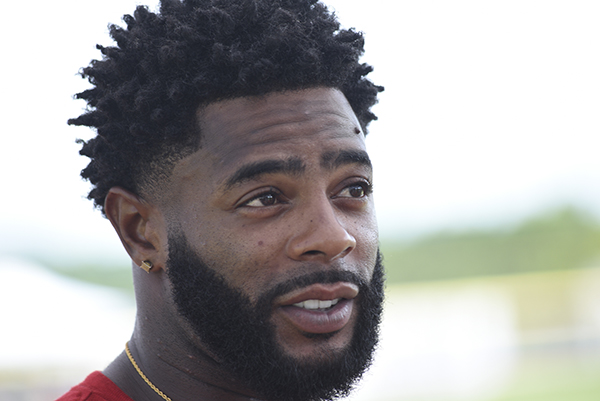 Tennessee Titans cornerback Malcolm Butler, a Vicksburg native, has donated a total of $20,000 to the United Way in Vicksburg and Meharry Medical College in Nashville, Tenn., to help fund its meals for the elderly program. (Courtland Wells/The Vicksburg Post)

Vicksburg’s biggest sports star is chipping in to help feed the city’s elderly during the COVID-19 crisis.

In Nashville, Butler is making a donation to Meharry Medical College to purchase supplies for healthcare workers and first responders, and to provide them meals. His donation will also purchase test kits so Nashville citizens can get tested.

Butler said he simply wanted to help his hometown in a time of need.

“Looking at the whole situation, I just feel like when you have a certain level of platform you should encourage people to do the right things like staying at home, staying clean, and spending time with your family,” Butler said. “Not only that, I wanted to give back and help out the community the best way I can. I’m just doing this from somewhere in my heart and I know it’s a well-needed situation.”

Butler’s donation will fund the program for two days next week, on Monday and Tuesday. After that, more donations will be required to keep it going, said Kami May, the director of marketing and community relations for the United Way of West Central Mississippi. The City of Vicksburg has also contributed to the program.

Meals are available for pick up at the Salvation Army, 530 Mission 66, on Monday and Tuesday from 11 a.m. to 2 p.m. Meals are served on a first-come, first-serve basis until they run out.

To spur additional donations, a fundraising campaign will begin in conjunction with Butler’s efforts. To donate to the campaign, visit unitedwayvicksburg.org and click on the “Donate” tab at the top of the screen.

Butler planned to use his large social media platform to publicize the effort.

May thanked Butler for getting the ball rolling.

“It was really exciting for him to reach out like that, and that he wanted to do something for his community,” May said.

For his part, Butler said he was inspired by some of his fellow NFL players who have stepped up to help their cities in times of tragedy.

Butler said he felt a responsibility to do something similar in Vicksburg.

“I’ll do anything to help out the hometown. I just want to see the world get back rolling,” Butler said. “You see J.J. Watt and Drew Brees and all of those guys giving back to their hometowns. I wanted to make sure I do the same and play my role as one of those guys in my city. I hope everybody stays safe and we can get the world back rolling once again.”