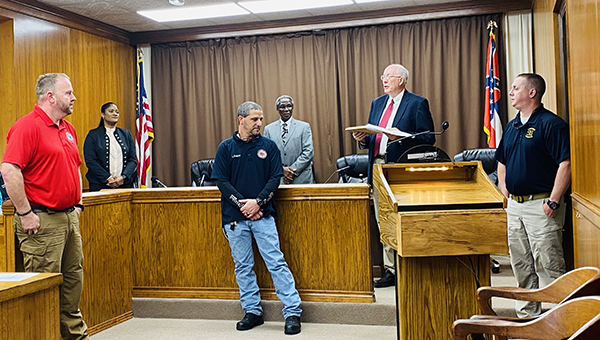 When Warren County Fire Coordinator Jerry Briggs, Warren County E-911 Director Shane Garrad and Culkin Fire Chief Lamar Frederick raced to Yazoo County to support rescue efforts in response to a pipeline rupture in the Satartia community in late February, they did not do so for the recognition, the honors or to be called heroes.

The three were honored Monday by the Warren County Board of Supervisors, who presented each with a plaque recognizing the acts of heroism the three exhibited on Feb. 22.

“I think there are a bunch of people, but certainly a couple of very specific people, who owe their lives to you for what you did that evening,” Warren County Board of Supervisors President Dr. Jeff Holland said in honoring the three. “What you did was courageous in the sense that on that very special evening you preformed what I would describe as the very definition of courage.

“It wasn’t that you were not afraid, but you went ahead while you were afraid.”

Holland said it was important to the supervisors and the county to tell the three how much their efforts were respected and appreciated.

“As a board we want you guys to know, as a county we want you to know, how proud we are of the acts that you conducted on Feb. 22, “ Holland said.

The plaque presented to each read:

“For your acts of heroism, bravery exhibited on Feb. 22, 2020 during the Satartia, Miss. pipeline rupture, your leadership has been proven invaluable to saving lives throughout our community. Thank you for your service.”