Health officials say they are prepared, but next few days and weeks are critical 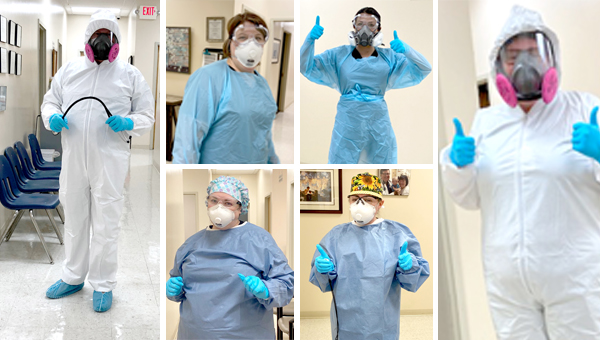 Dr. Dan Edney, pictured far left, and members are of his team at Medical Associates in Vicksburg, are pictured in just some of the personal protection equipment they are now using in caring for patients who are showing signs of COVID-19. (Submitted Photos)

As local lawmakers enact stronger restrictions with the goal of curbing the spread of the COVID-19 virus, they are also commending and highlighting just how prepared area health facilities are in the event the virus locally worsens.

Ahead of Monday’s Facebook Live event, where he answered questions from local media and viewers for nearly an hour, Mayor George Flaggs Jr. had a conference call with local medical officials in regard to the area’s readiness.

“In talking with Merit Health River Region and talking to the two doctors from here who happen to be from Vicksburg and on the (state COVID) Task Force, the city of Vicksburg and Warren County are ready,” Flaggs said during the Facebook Live event. “The issue is whether or not we are ready for surrounding cities like Rolling Fork and Port Gibson.

“But, for the city of Vicksburg and Warren County, they believe they are ready and they are taking the necessary steps to make certain they can accommodate the patients.”

In response to questions from The Post, Merit Health River Region said they are currently caring for two patients dealing with COVID-19.

“These patients are being cared for in accordance with Centers for Disease Control and Prevention protocols, including the use of personal protective equipment for the small number of staff providing medical care and placement of the patients in appropriate infection isolation rooms that are separate from other patients,” the hospital said in a statement, adding the facility is licensed for 361 beds, with 12 of those currently dedicated in the intensive care unit.

The hospital also said it had 10 ventilators and 10 anesthesia machines with conversion ability.

“While the COVID-19 pandemic is something no one has ever experienced before, we are closely following information from the CDC and Mississippi State Department of Health as we continue caring for our community,” the statement read. “We are grateful for the commitment and skills of our leaders and caregivers who are responding to this pandemic.”

KPC Promise Hospital, which is located within Merit Health River Region, also has one patient, a resident of Rankin County, who tested positive for COVID-19.

That case is being investigated by the Mississippi State Department of Health due to the fact the patient had been at the facility for nearly two months before testing positive. That investigation, not of the facility, but of the case, appears in the daily updates from the state as an “outbreak” at a long-term care facility.

The department says they “investigate residents, staff and close contacts of infected individuals for possible exposure.”

An article by The Post Saturday, which first reported the investigation, could have led some to believe the facility itself was being investigated, as opposed to how the patient — who did not arrive at the hospital with the illness — contracted the virus.

As for the ongoing research into how the patient was exposed to the virus, the company said it has tested employees who interacted with the patient, quarantined them for two weeks and taken every possible precaution.

“Again, all preventive measures were in place since the patient was admitted, including contact precautions prior to suspicion of COVID-19 and droplet precautions upon suspicion and confirmation of COVID-19. We continue to follow all CDC guidelines and state and federal regulations,” the company’s statement read. “All employees who came in contact with the patient were tested and self-quarantined out of an abundance of caution. All test results received to date have confirmed negative for COVID-19. As employees’ test results are confirmed negative they are permitted to return to work upon completion of their 14-day quarantine.”

Tuesday, the number of confirmed cases in both the state and Warren County increased.

As for the state figures, a total of 1,915 cases have been confirmed with now 59 confirmed virus-related deaths. In Warren County, the number of confirmed cases increased to seven Tuesday, with that number expected to increase as more testing is conducted and results from last week’s one-day test site at Pemberton Square Mall come in.

Following his call with health officials, Flaggs said the number of cases in the county may very well increase and reach a peak in the next week or two.

“I was advised by medical experts that community transmission is becoming a problem in Vicksburg and Warren County,” Flaggs said. “Cases are steadily rolling in and our local healthcare facilities are seeing jumps in numbers. We now know for certain that the virus is being transmitted in town from person-to-person.”

Flaggs added that the shelter-in-place order that he issued last week, in combination with the statewide order issued by Gov. Tate Reeves, can only do so much to curb the spread of the virus. He said residents need and should do more.

“Right now, the best thing we can do as a community is to limit the number of people in grocery stores and pharmacies. Only one person from each household should be going to stores,” Flaggs said. “Whole families should not be going to the grocery store together. Do not expose anyone in your family that you don’t have to.”

Dr. Dan Edney, with Medical Associates on South Frontage Road, one of the doctors on the state COVID-19 task force and a participant in Monday’s call with Flaggs, said residents need to take the threat the virus poses seriously.

“We are definitely concerned that too many people don’t understand what is at stake and clearly aren’t sheltering. The cases we see presenting this week relate to our mitigation behavior 10-14 days ago,” Edney said. “We expect the surge to begin next week and the apex to be the week of April 20, or possibly the week after. This week is our last chance to dampen the apex and blunt the surge.”

“This is our last opportunity to reduce the number of deaths we will suffer from the surge and our staying in needs to last another two weeks minimum,” Edney said. “Our older folks need to shelter until it’s all of the way over and the Health Department gives them ‘All Clear.’ My motto now is ‘Stay Home, Stay Safe, and Save Lives.'”

As for a return to “normal” and easing of restrictions, Flaggs said the next few weeks are critical, as is the input and advice from medical officials both on the local and state level.

As for Edney and his team at his practice, he said their response and focus is on the patients, a mission he said they are called for.

“Our crew is doing God’s work,” Edney said. “They have all been real champions willing to go in and help with anyone no matter the risk.”