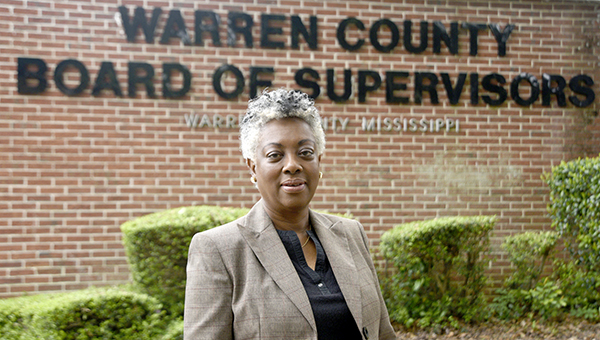 Warren County Administrator Loretta Brantley poses for a photo outside of the Warren County Board of Supervisors office Tuesday. (Courtland Wells/The Vicksburg Post)

Since January, Loretta Brantley has served as county administrator in an interim capacity. Monday, in a vote by the Warren County Board of Supervisors, that interim title was removed.

“I was happy and relieved that we are finally going to move forward with me as county administrator,” Brantley, who has worked for the county for 14 years, said after learning of the vote by the supervisors. “It was a little difficult being in limbo, not knowing. I was there doing the job the best I could. Now, I can move forward and implement some changes as county administrator.”

Over the past few weeks, the supervisors had worked through a selection process and interviews with candidates leading to Monday’s decision. Now, with Brantley’s full-time appointment, she and the supervisors will move ahead with a search for a new comptroller, the role Brantley served in before being appointed interim county administrator in January.

“The first thing I am going to work on is hiring a comptroller,” Brantley said. “I cannot continue to do two jobs, so we will need to fill that position.”

In her appointment in January and her selection Monday, Brantley made history as the first woman, and first minority person, to be selected to the top administrative position in the county. She follows John Smith, who in December retired from the post due to ongoing health issues after more than two decades in the post.

“John was awesome. I worked right under him, with him for years,” Brantley said. “There are a lot of things he taught me. And, there are some things, some changes, that I look forward to making.”

She added that she is admittedly nervous about stepping into the role, and to the shoes left behind by Smith.

“I am a little bit nervous. It’s a big responsibility,” she said. “There’s a lot to do and I have a large learning curve ahead of me. But, I am up for the challenge and ready.”

In her first three months since being appointed, Brantley and the rest of the county’s leadership has been challenged.

“Since January, it has been one thing after another. First, there was the rain and flood, and then the roads began washing out and now the coronavirus. It’s only been three months,” Brantley said. “Believe me, I am a praying woman. God is going to see Warren County through this, see me through this. We need to continue to chip in and help one another and work together.”