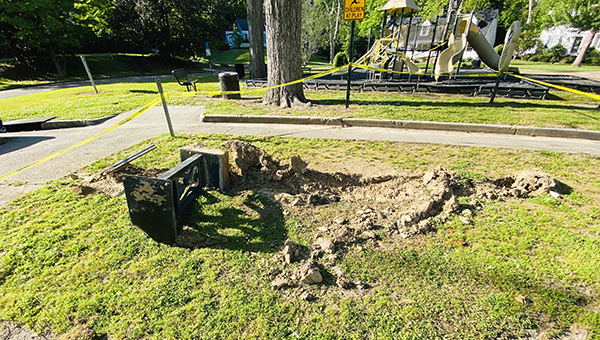 The Little Free Library, located in the Glenwood Circle neighborhood, remains on the ground after being destroyed by a drunk driver on Thursday, April 2. (Tim Reeves/The Vicksburg Post)

One of Vicksburg’s Little Free Libraries was recently destroyed, not by a falling tree or a mad rush of children looking for a new book, but rather a drunk driver.

The Vicksburg Police Department said officers were dispatched to the Glenwood Circle area, near the neighborhood’s playground, just after midnight on Thursday, April 2 to a report of a motor vehicle accident.

Once they arrived, officers saw that a vehicle had crossed over a curb and struck the Little Free Library that was between the playground and the large green space in the neighborhood.

The male driver of the vehicle was arrested for driving under the influence, which was his first offense. The identity of the individual arrested was not released.

To date, the stand which the Little Free Library was placed on remains on the ground, while the box — or library — that held the books has been removed.

The original idea behind Little Free Libraries began in 2009 in Wisconsin and was designed not only to help promote a love of reading, but it was also used as a means of bringing people together who want to share their favorite books with the community.

The Post has reached out to the couple who is the stewards of the Glenwood Circle Little Free Library for comment about their plans for rebuilding the location.