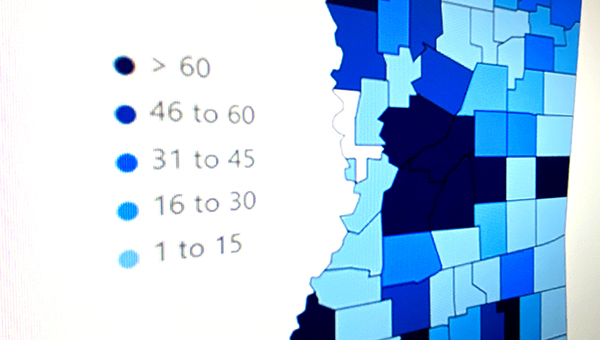 The first death of a Warren County resident due to the COVID-19 virus was confirmed Wednesday by state health officials. Details on the individual who died was not made available.

The report comes the same day as a significant spike in overall statewide cases is reported and a jump in virus-related deaths.

In their reporting Wednesday, the Mississippi State Department of Health announced 273 new confirmed cases in the state and one additional confirmed case in Warren County.

“We are entering into our highest risk period and likely will stay at this level for 10-to-14 days,” said Dr. Dan Edney, of Medical Associates of Vicksburg and member of the Governor’s COVID-19 Task Force, said after reviewing Wednesday’s updated numbers.

The number of virus-related deaths increased to 122 overall.

“The virus has begun to flatten but is not curving down yet. We should know more by early May,” said Dr. Carlos Latorre, of Mission Primary Care and member of the Governor’s COVID-19 Task Force, said Wednesday. “We need to continue social distancing for at least two more weeks. Avoid gatherings of more than 20 people, keep 6 feet apart, keep washing hands frequently for at least 20 seconds, avoid touching your face and wear a mask when going out in public.

“It is working great in Vicksburg, and I am very proud of our citizens,” he said.

Edney said the reporting for confirmed cases and deaths by the state is not the same process, leading to some frustrations on the part of health officials combating the virus.

“Another reminder, death reports are real-time but positive cases are five-to-seven days lag time due to not having rapid tests available to us,” Edney said. “The jump in new cases today are really showing a jump last week.

“We will be in the apex before we know it and will be coming out of it before we see it as well,” he said. “This is an incredibly frustrating part of our dealing with this epidemic. Physicians can’t see in real-time what we are up against.”