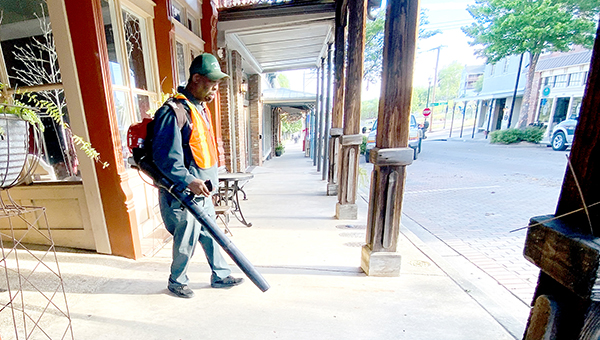 Flaggs plans a methodical approach to reopening city, some businesses

A day after he extended the city’s shelter-in-place orders, curfews and business restrictions one additional week, Mayor George Flaggs Jr. is putting plans in place as to how he will phase in a return for some of the city’s shuttered businesses.

During a press conference Friday, Flaggs said the full roster of the city’s employees will return to work Monday, but city offices and buildings will remain closed to the public.

During the civil emergency, where the city had cut back on personnel and departments, city operations continued with roughly 75 percent of the city’s full employee roster, with many departments rotating personnel a few days each week. Those employees who were completely shut down for a period of time, such as the city’s parks and recreation department, continued to receive their pay.

Ahead of city employees returning to work, they were required to have their temperature checked last week to make sure none of them were running a fever. With many of the 400-plus employees still working in some capacity over the past few weeks, Flaggs said the temperature check provided a baseline of data the city is using to make sure employees are remaining healthy.

Saturday, Flaggs said when he is in a position to begin letting some businesses reopen and resume some sort of normal operations, he said the first to come back will be the city’s restaurants and barbershops and salons, “if we can work it out.”

He also said that he will not move on any reopenings and easing of restrictions until first getting the go-ahead from Gov. Tate Reeves as well as local and state health officials.

Also Saturday, Flaggs said that he has a week-by-week plan of reopening sectors of the local economy, as permitted by guidance from the governor, Mississippi State Department of Health and in working with the Centers for Disease Control guidelines.

The plan also does not account for the need — if cases locally spike – for city leaders to put back in place any shelter-in-place orders, business restrictions and curfews.

• Week three — Recreation facilities, such as parks, playgrounds allowed to reopen, including Sports Force Parks on the Mississippi. This also includes gyms and fitness facilities.

In every case, there will continue to be strong social distancing and hygiene guidelines that each facility and business will need to abide by.

He also said that gathering restrictions at churches and funeral homes will remain in place until they are lifted by the Centers for Disease Control.

Stirgus relishes his volunteer role in delivering meals to children

With parents who dedicated their careers to the school system, it was a natural decision for Jim Stirgus Jr. to... read more