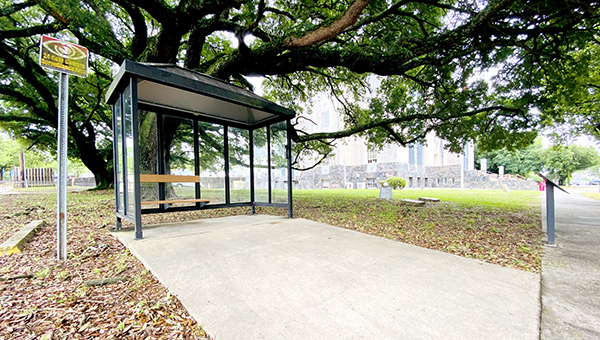 After supervisors adopted a new no-smoking policy, which goes into effect May 1, no smoking will be allowed anywhere around the courthouse except the designated smoking spot at the bus stop at the corner of Jackson and Cherry Streets or any public sidewalk surrounding the courthouse property. Also effective May 1, smoking will no longer be allowed in any county vehicle. (Tim Reeves/The Vicksburg Post)

After months of discussion, the Warren County Board of Supervisors announced a new, no-smoking policy, not just reinforcing a smoking ban for inside county buildings, but also creating a smoking ban for all county vehicles as well as a sizeable buffer surrounding the courthouse.

Beginning Friday, May 1, smoking outside the courthouse will be restricted to a designated area at the bus stop at the corner of Jackson and Cherry Streets or any public sidewalk surrounding the courthouse property.

Also, smoking will no longer be allowed in any capacity in any county vehicle.

The policy, which was unanimously approved by supervisors was originally scheduled to go into effect immediately, meaning Monday following the supervisors’ vote, but District 3 Supervisor Shawn Jackson asked for a delay until May 1 so that all employees could be properly notified of the policy change.

A cigarette butt receptacle was placed at the bus stop, which is operated by NRoute, with NRoute’s approval.

The Warren County Board of Supervisors does hereby resolve and order that:

• A. All enclosed facilities, including buildings and vehicles owned, leased, or operated by Warren County, Mississippi, shall be subject to the provisions of this Policy, and as such, shall be tobacco-free, with smoking allowed only in designated smoking areas and public areas such as public sidewalks adjacent to public streets surrounding county property. Public sidewalks do not include paved or concrete walkways on County property.

• C. This Policy applies to all employees, clients, contractors, and visitors.

• D. An employee of the County who violates this Policy shall be guilty of a group one offense and subject to disciplinary action as set out in Personnel Policies and Procedures of Warren County.

The Warren County Board of Supervisors Monday voted to extend the county’s shelter-in-place orders through Monday, May 4 with one... read more