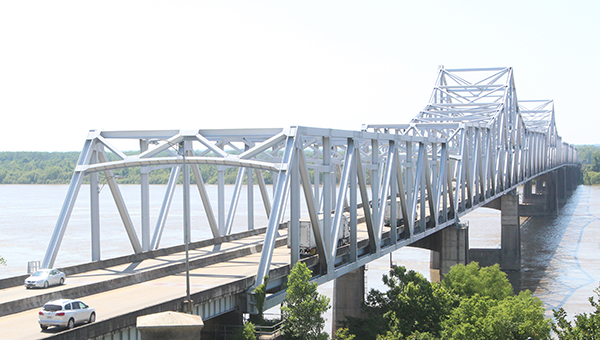 The Louisiana Department of Transportation and Development has announced lane closings from the Interstate 20 bridge to Mound, La. from May 11 to June 1.

According to information from LDOTD, there will be single-lane closures on I-20 westbound from the bridge to the Mound interchange at Louisiana 602.

There will also be periodic closures of the entrance and exit ramps for I-20 at the Delta interchange/US 80, the westbound rest area, and the Delta truck scales on I-20. Traffic will be detoured during the ramp closures, according to information from LDOT.

The state of Louisiana is responsible for maintenance on the I-20 bridge.

Missouri-based contractor OCCI Inc. is working on a bridge upgrade project that began Jan. 20 and is expected to be completed May 15.

The $27.7 million rehabilitation project includes significant repairs and upgrades to the bridge and is expected to extend its service life. The work has forced lane closures on the westbound section of the bridge.

Under the project, the old bridge deck is being resurfaced with new concrete to improve traction and preserve the structural aspects of the bridge flooring. The current electrical circuits are being replaced and about 100 roadway lighting fixtures are being replaced with a modern LED system.

Roadway fiber optics are being replaced with new cameras and radar, which will integrate the system into Mississippi’s IT network.

New navigational lighting and aerial beacons are also being installed, along with improvements to the bridge monitoring system and enhancements to the inspection access walkways.