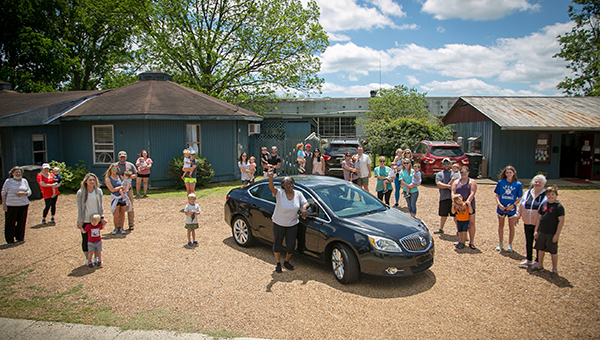 Patricia Johnson, center, is pictured with a car that was gifted to her Saturday by families of children who attend Small World Daycare or Colonial Day School. Johnson cares for the children in the daycare's baby room. (Photo by Josh LeMonte)

For the better part of 45 years, Patricia Johnson has helped nurture thousands of children from two and almost three generations.

In a career that began in 1974, she has cared for children who have since had children. She has seen babies come in and then move to the toddler room, then move to preschool. From there, they moved to school and beyond, but regardless of who they were or what they have become, they all have one thing in common; they are Mrs. Patricia’s babies.

Saturday, a small portion of the love she has shown to so many children and their families was repaid at a time when Patricia needed it the most.

In the weeks since Small World Daycare and Colonial Day School closed due to business and operating restrictions brought about by the spread of the COVID-19 virus, Patricia, who has cared for the smallest of those attending Small World, has been home. She has been without her “babies” and without an income.

Her unemployment benefits will soon come to an end, which means no income. But, obligations remain, bills remain, and recently, her car died.

That is when more than 30 families whose children have attended or currently attend Small World and Colonial came together.

In a matter of days, the group of families, combined with a significant contribution of an anonymous donor and a “great deal from George Carr,” were able to pull together the money necessary to purchase a 2015 Buick Verano.

“I was just called to do it,” Jonathan Brock, who, along with his wife, Whitney, led the effort to raise the money. Patricia, along with others at Small World, care for the couple’s 20-month-old son, John Robert.

Together, the families raised money that was then matched by the Brock family and a “few” anonymous donors to purchase the car.

“This would not have been possible without George Carr. They gave us a heck of a deal to make this happen,” Jonathan said. “It’s a beautiful car.”

With the money raised and the car purchased, all that was left was to pull off the surprise.

With the families already scattered around the parking lot of the school, and the new car placed in the center, Johnson arrived with Small World co-owner Linda Bryant. Johnson had no idea what was happening but she figured it out.

“I felt like I was going to pass out. It’s the best feeling I have ever had in my life,” Johnson said. “There’s nothing I need to worry about; I have transportation. You just don’t know what a blessing this is.”

But for Johnson, the car was just the icing on the cake. She got to see her “babies,” many of whom had come to join in the unveiling.

Bryant said Johnson, who has worked at both the daycare and the preschool, is beloved by the children and their parents.

“The baby room is her love,” Bryant said. “These children; they are her love and these families are her love. She has meant everything to us.”

Colonial owner Del Rogers said Johnson has been an integral part of the schools from the very beginning.

“She came all the time. Very loyal. She worked long hours and everyone that has come here gives her credit with keeping up with their children so well,” Rogers, who is co-owner of Small World as well, said. “A lot of us are teachers, but that first love for those babies is so special. And you wonder where all this love today is coming from, when you have someone’s child, their infant, you have their heart.”

Flaggs to extend city’s civil emergency order, with changes, to May 11