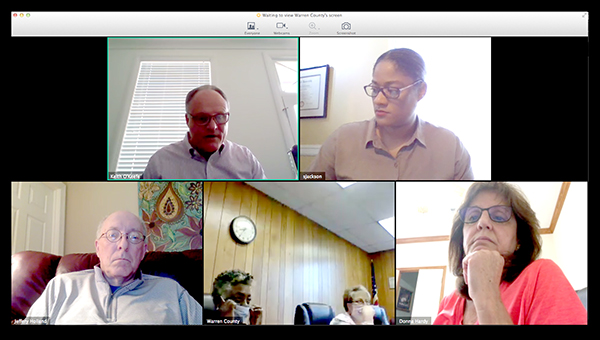 The shelter-in-place order that was extended by the Warren County Board of Supervisors to May 4 could be extended.

Tuesday, during a work session conducted by video conference call, supervisors expressed the likelihood of the county’s order being extended through Monday, May 18.

Any decision on extending the county’s order, which restricts some business operations, closes bars and nightclubs and places strict guidelines on the size of gatherings and customers at businesses, would be decided during the supervisors’ meeting Monday at 9 a.m.

District 3 Supervisor Shawn Jackson was a strong advocate during the meeting to extend the county’s current order through at least May 18, especially given the latest confirmed case numbers from the Mississippi State Department of Health that showed the number of COVID-19 cases in the county had doubled in the past week to 58 as of Tuesday.

“I think this is not the time in any way purport or give the message by even in our silence that we are not taking this seriously as we are going through our peak. And there may be times as a board we may need to justify this and remind people,” Jackson said. “It seems like we were more vocal as a community before we hit our peak and now that we are in the thick of it, I don’t want us to get normalized by this, because a 100 percent increase is some serious stuff.”

Board President Jeff Holland said that whatever decision the board reached in extending its order would also depend on what Gov. Tate Reeves decides later this week in regards to his current “Safer At home” order.

“I would agree that coupled with what we are saying now and the governor’s latest message that staying the course on our current resolution and with our current operation is the right thing to do. The question that I would then pose to you, for how long,” Holland asked. “The governor’s latest executive order runs through May 11. Were we to care to coincide with his, we would only extend for a week. Then we would have to get back together to assess what changes the state had made and how that impacted us.

“If the governor changes things, we’re probably going to have to react to that on May 11 anyway. So the 11th is a checkpoint for us so we might as well extend to the 18th as you were saying.”

Warren County Chancery Clerk Donna Hardy, who updated supervisors on a meeting courthouse and other county officials had last week to discuss courthouse operations, said supervisors need to send a clear message to the public with their next decision.

In her update, Hardy said she and others at the courthouse would hope that if and when supervisors decide to lessen the restrictions involving courthouse operations, that they institute a requirement that employees and those coming to the courthouse for business must wear a mask.

“We need to continue to send a strong message that we are here to serve you, but we are here to do it as safe as possible,”  Hardy said of the county offices and employees. “Don’t come to my office if you aren’t going to cover your face.”

County Administrator Loretta Brantley said given the supervisors have a regularly scheduled meeting on May 18, that extending the order through May 18 “might be a good time.”

“My vote would be for extending it another two weeks,” Jackson said. “Where Warren County currently sits, two weeks makes sense.”

Holland added the extension, whether it is for one week or two, might not be the latest extension needed.

“Where we are now is a protracted plateau. We shaved the peak off the top of our numbers, but that plateau that has been with us will be with us perhaps a month before we see the numbers go down. I think that is anyone’s best guess across the state,” Holland said. “So I think we have at least a couple more weeks of these numbers being high. And then, we will have to see what the impact to the community is from Grand Gulf and how that plays out in Warren County, along with any other outbreak we might have. ”

Dynamic advertising returning to the side of one iconic downtown building

In the years when it was the tallest building in Mississippi, the First National Bank building, located at the corner... read more