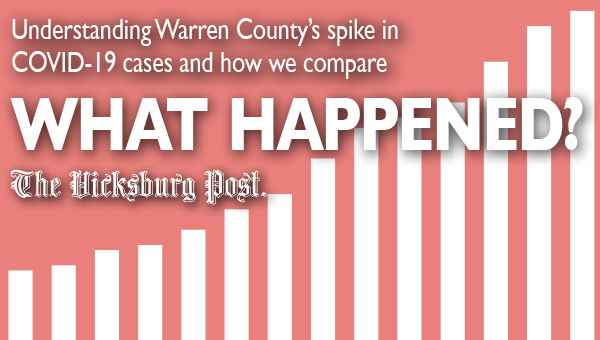 From the beginning, it appeared the COVID-19 virus had forgotten about the counties along the Mississippi River as it spread throughout the state.

Counties like Claiborne, Issaquena, Washington and the like had yet to report a case while those home to larger cities, such as Hinds, Forrest and Lauderdale, saw their number of confirmed cases quickly jump. DeSoto County, outside of Memphis, became an early hot zone.

Even with major highways and an interstate cutting right through it, Warren County went through the early weeks of the pandemic without a case, while experts knew the virus was lurking, just waiting to be found.

As the weeks clicked by and tests were conducted on those who were symptomatic, still nothing was reported in Warren County or other riverside counties.

Then Adams County reported its first confirmed case of the virus on March 20. Washington County saw its first case reported the next day.

It would be more than a week later, and nearly three weeks after the first case of COVID-19 was confirmed in the state, when Warren County saw its first reported case on March 29.

Still, even in the days following that first report, the number of cases — which were expected to quickly jump — stayed relatively low and flat given the size of Warren County’s population and the transient nature of those who either live here and work elsewhere or those who come to Warren County to work.

It was also surprising that the number of confirmed cases did not spike further during this time as families returned home from spring break, after enjoying time on cruises or in major metropolitan areas that would become international hot zones.

As of Sunday, April 12, two weeks to the day of the first confirmed case in Warren County, the number of cases stood at just 14 — an average of less than one per day.

Then, even as city, county and state officials tightened business operations, instituted curfews and closed schools, the numbers in Warren County continued to rise, but at a faster rate.

The average number of confirmed cases per day has gone from less than one on April 12, to three per day on April 30.

Some local leaders and medical officials have credited the recent spike to employees at Entergy’s Grand Gulf Nuclear Station, or contractors who have worked the station’s recent maintenance and refueling shutdown.

While Entergy officials confirmed some employees have tested positive, they did not provide a number or home county of those who tested positive. The Mississippi State Department of Health has also not confirmed the number of positive cases or any virus-related deaths from that facility.

Dr. Dan Edney, with Medical Associates in Vicksburg and a member of the governor’s COVID-19 task force, said state figures have flattened and will fluctuate slightly over the coming days before consistently falling.

“We may go down for a few days, then back up and then down again until we finally start our way down,” Edney said of statewide figures. “We have been at our apex for about 10 days.

“We had three more new positives reported which would have been from this week’s testing, so I am praying that we will see fewer positive cases for Warren County rest of this week and I’m actually expecting to see that,” Edney said.

Despite the recent increase in confirmed cases, they are not reported in real-time. Some healthcare providers are using private labs, which can turn tests around in two or three days, while those using the state labs may see longer turnaround times for results.

How does Warren County compare?

In a review of counties with similar populations and other attributes, Warren County’s numbers — which Thursday stood at 68 confirmed cases, or 1.44 cases per 1,000 residents — are in the middle.

The counties used for comparison include Oktibbeha, Washington, Hancock and Pike.

As of Thursday, Oktibbeha County, with a population of 49,481, had 51 confirmed cases and three virus-related deaths. That comes to just over one (1.03) confirmed case per 1,000 residents. While the county does not have an interstate running through it like Warren County, it is home to Mississippi State University and has a major highway, U.S. 82, bisecting it.

In Washington County, which has 47,086 residents as of the latest Census data, the number of cases stood at 77 as of Thursday, or 1.64 per 1,000 residents. Again, Washington County does not have an interstate, but it does have casinos, major state highways — including U.S. 82 — and a bridge connecting Mississippi and Arkansas.

Hancock County, along the Mississippi Gulf Coast, is home to 46,653 residents, and, like Warren County, has an interstate and casinos. As of Thursday, it had 62 confirmed cases, which gave them a ratio of 1.33 confirmed cases per 1,000 residents.

In addition to being of similar size to Warren County, Pike County has an interstate cutting through it, but it has seen a huge number of confirmed cases thus far. Officials have reported 148 confirmed COVID-19 virus cases, a ratio of 3.72 per 1,000 residents.

As for Adams County, which has roughly 16,000 fewer residents, but does have two major U.S. highways, casinos and a bridge connecting Mississippi and Louisiana, the number of cases and deaths is far higher than Warren County. Thursday’s report showed Adams County has 133 confirmed cases and seven deaths. That factors out to 4.21 confirmed cases per 1,000 residents; nearly 3 1/2 times more than Warren County.

Why are Warren County’s numbers lower compared to other, similar areas?

In comparison to other areas with similar characteristics, Warren County has fewer cases and fewer deaths, a fact Edney attributes to a number of factors.

“These are just some thoughts I have been having in regard to our numbers,” Edney said. “We are far enough away from the Memphis and New Orleans outbreaks and a good distance from Greenville and Natchez outbreaks.

“We are too close for comfort to the metro Jackson outbreak, but it appears far fewer people are going to Jackson unless they absolutely have to,” he continued. “If you look at our location, we’re almost an island with sparsely populated land surrounding us.”

Edney also credits the move by city and county leaders, and local medical offices, who acted quickly in establishing restrictions and protocols well before they were mandated.

“We had an excellent response by our city and county leadership to start restrictions sooner than the state order. They were ahead of the game,” Edney said. “The medical community shifted to telemedicine and kept clinics virtually empty since mid-March way ahead of other restrictions. We were complying with Mississippi State Department of Health recommendations long before they became public health orders.”

And, more importantly, Edney said the Warren County community did a pretty good job in adhering to restrictions put in place by local, state and federal governments.

“We have had a very good compliance rate with the shelter-in-place orders by our community,” he said. “The response is far from perfect but good enough to blunt our numbers.”

What could we have done differently? What would we do all over again?

Vicksburg Mayor George Flaggs, Jr. and Warren County Board of Supervisors President Dr. Jeff Holland together have led the local response to the spread of COVID-19.

In early press conferences, the two leaders stood side-by-side in announcing the combined response by both governments, a move that provided a unified response to the threat posed by the spread of the virus.

For Flaggs, who oversees a municipality that is responsible for most of the county’s businesses, particularly retail businesses, a shutdown of the local economy hit the city’s budget hard.

Flaggs scaled down the city’s workforce, moving employees in many departments to a rotating schedule, while working with the police and fire chiefs to ramp up first responder rosters, canceling scheduled vacations and preparing a county-wide emergency medical response to what was expected to be a massive need.

The fire department designated a special ambulance for the COVID-19 response, one that would respond to a possible virus-related case once the patient was thoroughly screened by E-911 dispatchers. To date, only one patient transported to the hospital by that designated ambulance has tested positive for the virus.

Holland, along with the rest of the supervisors, also scaled down county government He asked many employees to work remotely, worked with the elected officials who work in the courthouse to close open access to the facility and closed the county-run Clear Creek Golf Course and the Eagle Lake community boat ramp to the public.

The county adopted similar business restrictions that were placed within the city limits that closed bars and nightclubs, restricted restaurants to curbside and pick-up services only, and strictly limited the number of people allowed in gatherings and in parking lots at businesses within the county.

As the state has eased up its restrictions, the county has as well. Clear Creek Golf Course reopened last week.

“I think one thing that we would do all over again would be to be proactive, act well ahead of the curve,” Flaggs said. “The public has been fantastic through this time; 90 to 95 percent of them have gone along under these restrictions understanding why they are needed.”

Asked what he would hope to forget about the past six weeks, it was a simple response.

“The virus. I wish this thing had never happened,” he said. “I would love to be able to look back and forget all about it. That won’t happen.”

The section of Porters Chapel Road off South Frontage Road has been temporarily closed for construction work connected with the... read more