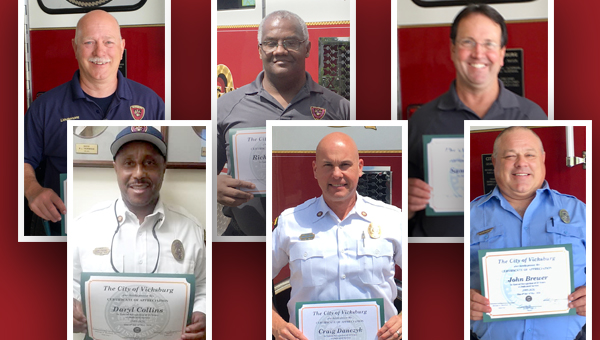 City leaders honor a ‘brotherhood’ within the Vicksburg Fire Department

There was something special about a group of firefighters hired by the city on May 10, 1995. Of the 17 firefighters who joined the department on that date, seven of them still remain, with six being recognized Monday for reaching a significant milestone in their career.

Monday, six members of the Vicksburg Fire Department were recognized for by the Board of Mayor and Aldermen for their 25 years of service to the city and its residents.

“Our group was outstanding and most made a career out of it and became officers,” Danczyk said. He said technically seven of the class remain with the department, adding that Capt. Michael Puckett worked in fire prevention for 14 months before joining the department. Danczyk said his anniversary date is March 1994. “Our group has a magnetic brotherhood relationship.”

“You take seven left out of 17 after 25 years and that is extraordinary,” Danczyk said.

Merit Health River Region announced Monday that patients who have delayed surgery or other non-emergency procedures can now work with... read more