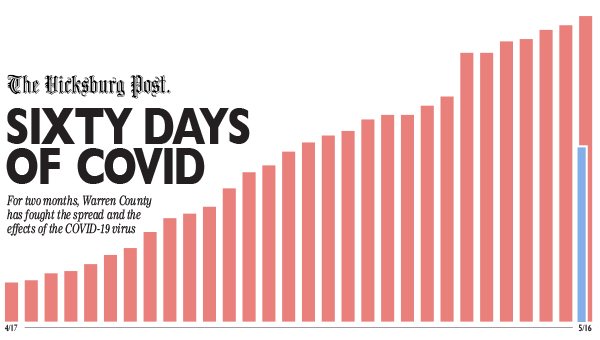 For two months, Warren County has fought the spread and the effects of COVID-19

As local, state and federal leaders begin to ease the weeks of restrictions on individuals and businesses, health officials are continuing to urge caution as society reopens.

Friday, Mayor George Flaggs Jr. announced churches within the city could begin to hold in-person services once again at 50 percent of the church’s capacity. His order also provided room for funerals — both graveside and indoor services — to welcome more guests.

As for churches, the new order urges church members to wear masks, and asks churches to keep a list of those who attend. But, while the new order allows for churches to resume service, “curbside church or communion services … along with live-stream, online broadcast and other social media platforms for viewing services” is encouraged.

Thursday, the Mississippi Gaming Commission announced casinos in the state could reopen Thursday and Friday provided a detailed report laying out guidelines on how casinos shall operate moving forward. The report not only restricted the number of guests casinos could welcome back, but gave point-by-point instructions on how the commission expects casinos to handle everything from how often they clean common areas to how often the dice are disinfected.

These announcements come during the same week that hair salons, barbershops and gyms were allowed to reopen in Mississippi.

This week also marked the deadliest week thus far in Warren County, with two virus-related deaths being reported. As of Saturday, four local residents have died due to complications of the virus. It was the first time in the pandemic that deaths had been reported on back-to-back days, much less in the same week.

Saturday marks roughly the end of the second month of the pandemic for Mississippi. In Warren County the first confirmed case of COVID-19 was not reported until March 19, more than two weeks after the state’s first case was confirmed on March 11.

Since then, the numbers have steadily grown. And, the community has gone from seeing parks, businesses and schools closed. Graduation services and weddings have been forced online or canceled altogether.

In these two months, restaurants have gone from closed, to curbside and pick-up only, and back to allowing dine-in customers with strict guidelines in place. Ballparks have gone from closed to reopened and youth ball seasons that were once thought to be gone for the year are growing closer to beginning their seasons.

On one hand, the past 60 days have felt like an eternity, but yet the fight against the spread of the virus is about to start its third month.

Two weeks later, on April 15, there were 15 reported cases and the community was saddened by the report of the first Warren County resident to lose their life to the virus.

On May 1, the number of cases stood at 74, and a second person had died.

In Saturday’s report from the Mississippi State Department of Health, the number of confirmed COVID-19 cases in Warren County during the pandemic grew to 133 overall. But, as the number of cases increased, so too has the number of those who have presumably recovered.

Using guidelines from the state, which gives direction on how to determine the number of presumed recovered cases in the area, Warren County should consider just 51 of those overall cases active.

The state reported May 3 that it was classifying 6,268 of its total cases as “presumed recovered.”

But, in the past two weeks, the number of cases has steadily grown, including the largest one-day spike in confirmed cases.  Overall, 55 new cases have been reported in the past 14 days, with 19 of those cases — a one-day record — reported on May 10.

Those 55 cases make up 41.3 percent of all the cases reported thus far during the pandemic.

That number has steadily increased in recent days and weeks and comes as state health officials have announced plans to have every resident and staff member of long-term care facilities in the state tested in the coming days. That program will give a better snapshot of how the virus is progressing in those facilities, which may lead to an additional spike in numbers.

Officials with Merit Health River Region confirmed Saturday the hospital in Vicksburg is currently treating nine patients with COVID-19 but did not provide details on how many of those patients are requiring a ventilator.

Nearby, Hinds County continues to report the highest number of cases of any county in the state, but that is expected given it has the state’s largest population.

Claiborne County, Saturday, reported 48 total cases, with Sharkey County now reporting six cases. Sharkey had been at just five cases for more than two weeks before reporting an increase of one Saturday.

Yazoo County reports 182 cases overall with two virus-related deaths. And Issaquena continues to be the only county in the state that has yet to report a positive case.

Warren County man arrested and charged with shooting his sister