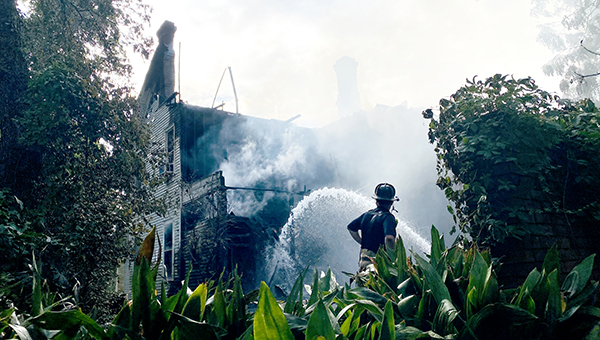 Firefighters with the Vicksburg Fire Department respond to a Sunday afternoon house fire on Drummond Street. The home, located at the corner of Drummond and Finney streets, was destroyed. (Tim Reeves/The Vicksburg Post)

What was earlier in the day a stately, two-story home on one of Vicksburg’s most scenic streets, is now nearly a shell of itself following a Sunday afternoon fire.

Around 5 p.m., units with the Vicksburg Fire Department responded to a call at 2521 Drummond Street. Once they arrived, they found a home — located at the corner of Drummond and Finney streets — fully-involved in a fire.

Over the next few minutes, the fire, that officials believe started at the back of the home, quickly raced to the home’s roof. Moments later, the roof was fully-involved, with flames shooting 10-to-20 feet above the roofline.

Units responding worked quickly to gain control of the fire, and at the same time, worked to protect neighboring homes.

The department’s Ladder 3 responded, allowing firefighters the ability to send massive amounts of water onto the roof from above in an attempt to gain control and douce the fire.

Only after the roof collapsed, and portions of the backside of the two-story home fell, and most of the fire was under control, were firefighters able to enter the home to begin to look for additional hot spots.

One firefighter did require medical attention, but Chief Craig Danczyk said the firefighter was fine and had received an IV.

Danczyk said it would be some time before investigators would be able to determine the cause of the fire, but neighbors on either side of the home did report hearing a pop or a bang before going outside and seeing the home on fire.

A woman was in the home at the time of the fire but was able to make it out safely.

Vicksburg Municipal Court resumes its regular schedule Monday after more than a month. According to information on the Vicksburg Police... read more