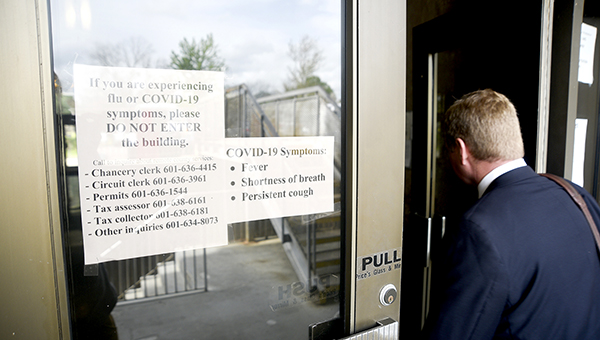 During a conference call Thursday, county elected officials and department heads started the discussion on not just when, but how county offices will operate when COVID-19 restrictions are lifted in the coming weeks.

“We need to agree that it is going to happen. We are going to reopen the courthouse. And it will be sooner rather than later,” Warren County Board of Supervisors President Jeff Holland said.

During the hour-long conversation, department heads and agency directors talked through their concerns and what process they might consider as restrictions are lifted and the public is allowed additional access to county offices, including those in the Warren County Courthouse.

While the discussion did not establish firm policies, it did provide insight into how some offices would seek to operate when the county’s current orders expire on June 1.

In one case, the Warren County Jail will continue to not allow public access. Warren County Sheriff Martin Pace said the reason for maintaining current restrictions at the jail is he has a responsibility not just to his staff and his personnel, but to the inmates he is charged with caring for.

The elected officials who maintain offices within the courthouse discussed ideas that included keeping the courthouse locked to the public, allowing access by appointment only, adding temperature screening and requiring facemasks in the event access is made easier.

At the end of the discussion, Holland asked for an in-person meeting to finalize plans for courthouse operations, and those for other county buildings, including the Board of Supervisors’ office. It was expected that those plans would be completed and announced ahead of the county’s current emergency orders expiring June 1.

The Warren County Board of Supervisors decided Thursday to defer any additional guidelines involving churches and how they should operate... read more