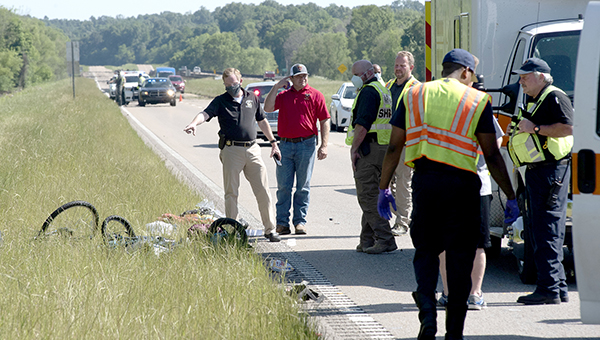 Warren County Sheriff’s Office and Warren County Fire and EMS personnel respond to the scene of an accident on April 24 where bicyclist was struck by a vehicle traveling northbound on U.S. Highway 61 South. (Courtland Wells/The Vicksburg Post)

Just after 3 p.m., a vehicle struck Yost’s bicycle, sending he and his bike off to the side of the road. He was injured.

Emergency medical teams from the Vicksburg Fire Department, along with Warren County fire units, joined the Warren County Sheriff’s Office in quickly responding to the scene.

Yost, a resident of Virginia, was transported to University of Mississippi Medical Center in Jackson. On May 15, three weeks after the accident, Yost died.

The accident was investigated by the Mississippi Highway Patrol. Details on that investigation have not been made available.

History is repeating itself at St. Aloysius High School. Both Adam Eckstein and Ann Elizabeth Farthing will share the honor... read more