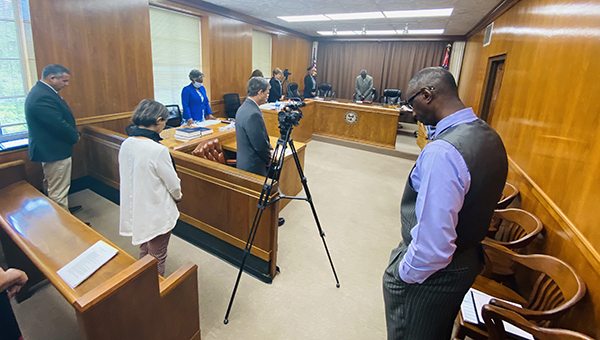 Members of the Warren County Board of Supervisors, along with other county leaders, pause for a moment of silence in remembrance of County Road Manager Larry Flowers who died Friday. (Tim Reeves/The Vicksburg Post)

The list of restrictions installed by the Warren County Board of Supervisors in response to the spread of the COVID-19 virus was allowed to expire Monday after supervisors decided not to extend the order.

Warren County Board of Supervisors President Dr. Jeff Holland said in the coming days the easing of restrictions will reopen the offices in the Warren County Courthouse, but they will be replaced by a strict social distancing policy.

Holland asked for the public’s patience as the offices in the courthouse and other county buildings are reopened to the public and as the social distancing measures that will be put in place to ensure the safety of the public and the employees working in the offices are implemented and carried out.

The number of people allowed in each office will be determined by each office and elected official. Also, residents are still encouraged to call the offices ahead of time.

In other items discussed during Monday’s meeting:

• Supervisors heard an update from Warren County Engineer Keith O’Keefe that applications had been filed Natural Resource Conservation Service funding for 28 road sites that had sustained damage during heavy rains in mid-February. The funding request for the 28 sites totals $14 million.

As for IP, the company is requesting $13,343,649 of capital improvements made in 2019 be exempt for up to 10 years. According to Warren County Tax Assessor Ben Luckett, there are some questions remaining with IP’s application.

Supervisors can approve the tax abatements for up to 10 years.

• The Board of Supervisors approved a formal agreement with the Department of Environmental Quality for solid waste assistance. In the agreement, the county will receive a total of $70,706 to fund both the annual household hazardous waste collection day and fund the county’s effort to clean up illegal dumpsites within the county.

As for the household hazardous waste day, it is scheduled for Saturday at Sherman Avenue Elementary School beginning at 8 a.m.

Some of the items that will be accepted during the event include batteries, used motor oil, antifreeze, insecticides, pesticides, acids, flammable liquids, paint, computer equipment, fluorescent lightbulbs, ammunition and more. Non-hazardous materials such as metals and tires will also be accepted.

The event will continue through 2 p.m. Saturday in the school’s parking lot and will be held rain or shine.

• In a solemn moment, Holland asked for a moment of silence following the opening prayer in remembrance of County Road Manager Larry Flowers, who died Friday at his home. He was 52-years-old.

C J Williams Mortuary Services in Vicksburg is handling the funeral arrangements, which as of Tuesday had not been announced.

Whenever Kendrick Bershell took the mound this season, there was only one way to describe it. “It was electric,” said... read more