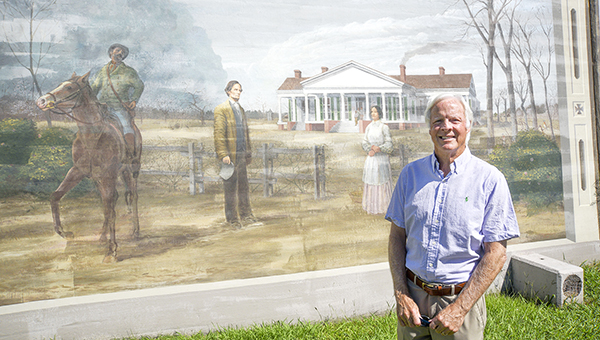 Bertram Hayes-Davis stands near the mural depicting his great-great-grandfather Jefferson Davis. The mural is part of the Riverfront Murals along Levee Street in Vicksburg.(Courtland Wells/The Vicksburg Post)

In June 2015, Bertram Hayes-Davis, the great-great-grandson of Confederate States of America President Jefferson Davis and a man with deep connections to the South, wrote an op-ed piece stating “symbols that are used to create fear or mistrust have no good purpose in this day and time.”

In the piece, Hayes-Davis said “it is time for the Confederate battle flag to be part of historical collections and not a public symbol to any one person, group or organization.”

Hayes-Davis is a resident of Vicksburg, a lover of history, and today part of the growing chorus of people calling for Mississippi to change its state flag, which is anchored in part by the battle flag.

His renewed call for the change comes weeks after George Floyd was murdered by a police officer in Minneapolis, Minn., sparking protests and riots across the country, some of which have led to the destruction and defacing of monuments and memorials honoring Confederate heroes or those connected to slavery within the United States.

It also comes at a time when state lawmakers are working in both the House and the Senate on proposals that would remove the battle flag from the state flag.

Hayes-Davis said up until recently, the political will on those in state leadership was to keep the flag, keep the symbols that had for a long time been used to divide the state and country.

“Politicians had to placate their base. Everyone has their base,” he said. “And it would never go anywhere on a bill to change the flag, they didn’t want their name on it because there is going to be another guy running against them saying, ‘He voted to change the flag.’ That’s not providing any leadership for the state to move forward.”

He said Mississippi has an opportunity now to show just how much has changed since a 2001 referendum to change the flag failed.

“We have an opportunity. Could you imagine the press if the state said, ‘We actually understand what is going on here and we’re moving forward and changing the flag,’” Hayes-Davis said. “Mississippi being proactive with something? It would be amazing.”

While Hayes-Davis said the state flag needs to be changed, he said the flag and the history of the Confederacy does not need to be removed, but preserved, taught and learned from. And, he said, Vicksburg may very well be the best place for that historical understanding and context to be shared.

“I look at the potential of this place to share our history,” he said. “The most amazing thing about Vicksburg, if you look at it, is the murals. You walk those murals, and I take people down there to walk those murals, I am even astounded. When you start talking about the significant things that happened in Vicksburg — and they’re not earth-shattering — they’re just great stories. Teddy Roosevelt. The bridge. The barges bringing the trains across. You know the things you see there that you can’t even fathom today. All of a sudden it becomes real because of the picture.

“Just as Lincoln said Vicksburg was the key to the South and winning the war, we could be the key to understanding,” he continued. “The history of the South comes through Vicksburg.”

In his op-ed piece in 2015, Hayes-Davis said, “The argument of heritage has validity if used in a historical context and placed in the proper perspective. Public display has always been an issue, by opening wounds of hurt from the past, for many people.”

Hayes-Davis believes the history of his great-great-grandfather is far more than the years he spent as president of the Confederacy. History will always highlight that time, but “forgotten are the first 52 years of his life as an American patriot. West Point, U.S. Army, U.S. Representative, secretary of war and senator, along with many great accomplishments for his country.”

So too, he said, are the later years of Davis’ life, where he “professed we are a country of one and that we should all become part of that country and do all you can to make this country as great as it can,” Hayes-Davis said. “Forget about what is behind us. Move forward and do not hold on to the past to define yourself.”

In that vein, Hayes-Davis believes he is moving in the direction his great-great-grandfather would have wanted.

“We need to come together as a state and everyone has to believe that we can. Come around the divide, understand the division, get rid of it and move forward. Let go,” he said. “You know folks, as I do, who have that flag on their mantle, on their license plate. I have no problem with that, but I think as a state we have moved past that.

“We are here nearly 160 years later and still holding on,” he said. “Put it where you have it. Remember it. Go see it and know that it is preserved but it is not something you continue to hang on to.”

In the end, Hayes-Davis stands by his comments made nearly five years ago when he wrote, “it is time that this flag be folded and placed in the right historic perspective and locations.”

In what might be among the only normal things to happen thus far in 2020, the Vicksburg Farmers’ Market has... read more