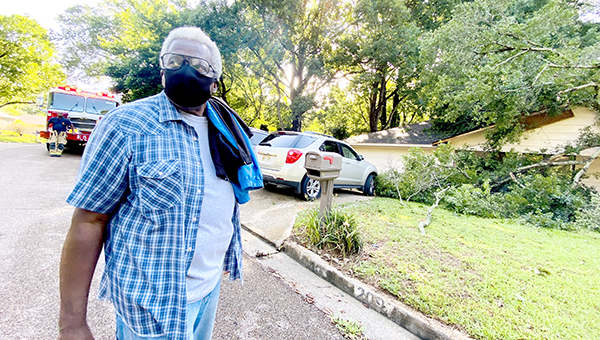 The moment when a complete stranger reminded me of something important

I had never met Garland Cary until Wednesday morning when his world literally had come crashing down.

Just moments before we met, he was in his living room and his wife, Linda, was still in the couple’s bedroom. Then, Garland thought he heard lightning strike the top of the house, but there was not a storm in the area. No, it was half of a large oak tree in the couple’s yard that had crashed onto their house sending limbs through the ceilings in the living room and bedroom.

As the limbs crashed through, drywall and rafters fell.

In that moment, I can only imagine the fear and heartbreak Garland felt. He was in one room, having just thought his life was about to end only to then hear cries from his bride, who without a doubt was injured, he just didn’t know how badly.

Thankfully, Linda was not seriously injured, but medics from the Vicksburg Fire Department were still dispatched and she was still transported to Merit Health River Region for treatment of the wounds she did receive.

But when we met, his house nearly crushed from what was most of a massive oak tree, he was calm, collected and cordial; all three things I am sure would not have described me in a similar situation.

He looked at the tree and he joked about he was just talking the other day about needing to get some of the limbs from that tree — the same limbs that minutes earlier pierced through his house — trimmed. We also commented back and forth on the size of the tree as if we were comparing bass we had just caught.

And what made the experience so amazing, and one that I will not soon forget, was in the midst of his wife being loaded into an ambulance, and the site of his home nearly destroyed, he quietly said, “God blessed us.” What a great statement in normal times, but what an amazing statement in this time.

The past few months, which have been complete with pandemics and protests, division and dilemmas, there has been comfort during those moments when I and my family have slowed down, focused on strengthening our family and relying upon faith.

There are a lot of things we all miss in what is called this unprecedented time, but what I will take away from this are the stories and the experiences like Wednesday when a man I have never met, at what should have been the lowest moments of his life, took a deep breath, smiled and reminded me that “God blessed us.”

Tim Reeves is editor of The Vicksburg Post. He can be reached at tim.reeves@vicksburgpost.com.

Letter to the editor: Peaceful protest is a tribute to all involved

The recent protest march in downtown Vicksburg is a tribute to the citizens who organized it and to the city... read more