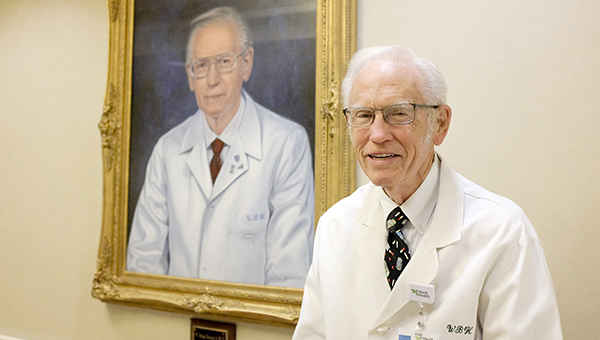 A man, a doctor, who became a pillar of the Vicksburg community died Saturday.

“His life was marked by great joy and accomplishment,” Briggs Hopson III wrote. “His legacy is rich. I am blessed beyond measure to be his son. While sad for his loss, my family celebrates a life well lived and the hope of eternal peace with our Heavenly Father. We love you, Dad!”

Dr. Hopson retired as a physician in September 2017 after serving 50 years as a physician and an advocate for the medical profession and better medical care in the state. He served as a community activist who served many local organizations from the Red Carpet Bowl to the Miss Mississippi Pageant, and was recognized as a driving force in the design and development of what was then called River Region Medical Center.

“I’ve known Briggs for 50 years,” said Dr. Paul W. Pierce III at the time of Dr. Hopson’s retirement. “He has been a wonderful leader for the medical community. He has an excellent reputation and served as a medical director for 30 years. I think he has been good for the community. I hate to see him retire; I think it will mean a loss of leadership for the community and the physicians.”

When he retired, Dr. Hopson told The Post in an interview that he would miss being a surgeon.

“It’s been a joy. I love going to work,” Dr. Hopson said in 2017. “The greatest thing I miss is performing surgery and seeing the patient leave the hospital and come back cured of cancer; cured of whatever disease they had. I enjoyed seeing my patients do well. That was my joy in life.”

A graduate of the University of Tennessee Medical School in Memphis, Tenn., Hopson began his practice in Vicksburg in 1967 after completing his internship and residency at the school’s medical center, serving as chief surgical resident and an instructor in surgery.

Hopson was hired by Dr. Gus Street and did most of his practice at Mercy Hospital.

In medical school, he said, “I worked with some good surgeons at that time, and when you first started out, the first two or three cases, the senior surgeons and the teachers would work with you. When they saw you could do it, they gradually let you do more and more.”

He said the medical school had exacting standards for its students.

“They were so strict, it was unreal,” he said, adding his medical school class began with 60 students and finished with 29. “They would cut you like that (from the program); they didn’t put up with anybody.”

He recalled two cases from those early years. One was a man who shot several other people and was also wounded. He saved the man’s life, “And he cussed me, and called me a name, and said, ‘When I get out of here, I’m going to kill you.’ I said, ‘Man, I saved your life.’ He said, ‘Well hell, you should have let me die.’”

Another shooting victim was more grateful. His name was James Meredith.

Hopson was the surgeon on call when Meredith was shot during his 1966 “March Against Fear” walk from Memphis to Jackson.

“I met him later,” Hopson said. “I told him, ‘You probably don’t remember me, but I’m the one who removed the bullet from your back.’”

His influence to go into medicine came from his childhood in Delhi, La.

“There were three drug stores there and my dad owned one of them. I worked there, and I think my dad always wanted to go into medicine, and he couldn’t really afford it, and I knew that was something he couldn’t get and something I wanted to do.”

He attended the University of Mississippi, where he met his wife, Pat. Although he was accepted at Tulane Medical School in New Orleans, he decided to attend the University of Tennessee, because Memphis was 70 miles from Oxford and Pat.

Two weeks before he started medical school, however, the couple married.

“She has been a good wife,” he said, crediting her with raising their four children, State Sen. Briggs Hopson III; Jay Hopson, University of Southern Mississippi head football coach; Kathy Ricks, regional director of the FEMA AmeriCorps program here; and Karen Hall, a Realtor in Dallas.

“People tell me, ‘You have great children.’ I tell them that’s because of their mother, she raised them,” he said. “I was always at the hospital, and she raised them, took care of them, brought them up.”

Hopson said his desire for volunteer work goes back to his childhood.

One case of raising his hand put Hopson in the role of developing the state’s emergency medical protocol. He was appointed by then-Gov. Kirk Fordice to the state’s trauma committee, helping develop the program and teaching trauma surgery at the University of Mississippi Medical Center. He also lobbied the Legislature to have bills passed to establish trauma level hospitals.

Another was his work with the development of River Region.

“When we were building this hospital, I went to Nashville (Tenn.) for meetings, kept paintings and wallpaper (for the hospital) at our home. We picked out everything. My wife kept telling me, ‘You need to go to work and stop this traveling.’”

His efforts to improve not just trauma care, but overall medical care in the state, earned him recognition from the University of Tennessee and the University of Mississippi School of Medicine. Both schools have placed him in their halls of fame.

When he learned of the honor from the University of Mississippi, “I told them I didn’t attend their school. They told me, ‘It doesn’t matter. You have done more for patients in Mississippi than anyone else has ever done.’ I’ll never forget that; I cried.”

He credits his wife, who served as a hostess for the Miss Mississippi Pageant, for getting him involved in that endeavor.

Because he was a doctor, Hopson would see some of the contestants when they were ill. It was a practice that led to him being named the pageant’s physician.

“That’s how I became involved, and became more and more, until I was on the pageant board and then we volunteered to keep Miss Mississippi at our home, to help prepare her for Miss America,” he said.

The work included accompanying Miss Mississippi to Atlantic City. He also served as a trustee and later chairman of the Miss Mississippi Board, and on the board of directors for the Miss America state pageants. In June, he and his wife received lifetime achievement awards.

In October 2019, a section of Mulberry Street that stretches in front of the Vicksburg Convention Center — the home of the Miss Mississippi Pageant — was renamed Dr. Briggs Hopson Boulevard.

Flaggs said during the ceremony that people know Hopson as a physician, “But you don’t know how much this great man has done for this city and its progress.

“I don’t know of anything progressive that he wasn’t on that side, whether health care or civil rights, he was always there,” he said. “He kept his door open, not only for this city but for the state and the nation.”