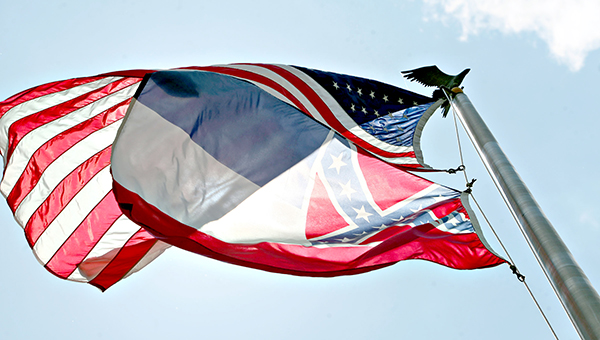 Over the weekend, the Mississippi Legislature voted overwhelmingly to change the state’s flag. On Saturday, Gov. Tate Reeves announced he intended to sign that legislation, which will remove the Confederate Battle Flag image from any future flags.

But, until the legislation is signed, the current flag will continue to fly over a number of locations in Vicksburg and Warren County.

According to Briggs Hopson, who is the attorney for the Vicksburg Warren School District, public schools are required to fly both the American flag and the state flag. Once Reeves signs the legislation — which is expected this week — the flags could then be removed.

The flag also continues to fly at county buildings, most notably the Warren County Courthouse. According to county attorney Blake Teller, there is no statute that requires counties to fly the state flag. In fact, some counties in Mississippi moved to stop flying the flag in recent weeks as the push for a change was growing.

Monday, District 3 Supervisor Shawn Jackson circulated a memo to other members of the county’s Board of Supervisors, requesting the board “expeditiously follow suit in removing the current Mississippi State flag from all property, buildings and structures owned by Warren County.”

Jackson, in an interview with The Post, said she received positive feedback from her fellow supervisors on possible next steps, including a special meeting to vote to remove the flag.

“If such removals require a majority vote by our board, I ask that we immediately call a special meeting, pursuant to Mississippi State Statute, in order to present an official order for the removal and vote accordingly,” Jackson wrote in her memo.

“I do feel strongly that it was time to change the flag so that it becomes something anyone in our state can stand behind,” District 5 Supervisor Kelle Barfield said. “Mississippians can become role models of coming together and making progress on issues that divide us.”

Barfield said as far as moving ahead with removing the flag from county buildings the county should follow the lead of state officials.

“I believe that as an extension of state government, the county government should display the flag of our state, but with the governor’s anticipated signature and removal of the flag from state buildings, I would support Warren County bringing the flag down as well,” Barfield said.

A special meeting had been called for Thursday to vote on the matter, but it was later determined that a meeting could not be called that quickly. Tuesday, the meeting was canceled, and the matter is expected to be part of the board’s regularly-scheduled meeting set for July 6.

As for the city of Vicksburg’s buildings and facilities, city leaders under the leadership of then-Mayor Robert Walker moved to stop flying the state flag in 1997.

In 2001, then State Rep. George Flaggs Jr. from Vicksburg was surprised, not necessarily by the outcome, but by the... read more