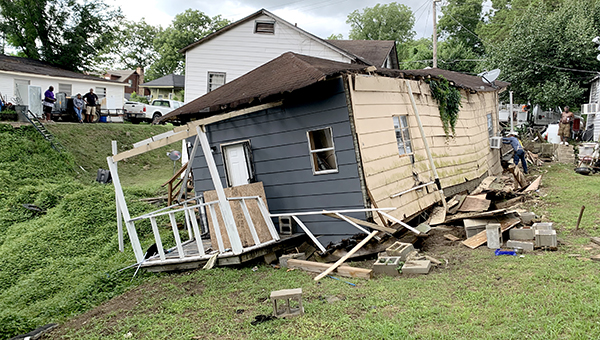 No one was injured Saturday afternoon with a home on James Stirgus Street collapsed. (Courtland Wells/The Vicksburg Post)

A combination of recent rains and loess soil might have been the dangerous combination that led to a Vicksburg home collapsing Saturday afternoon.

The Vicksburg Fire Department was dispatched to the 1500 block of James Stirgus Sr. St. Saturday around 2 p.m. for an investigation of a possible gas leak.

When they arrived at 1510 James Stirgus Sr. St. they found the home collapsed and partially lying up against a neighboring home.

Assistant Fire Chief Henry Williams, who was the shift commander for the Vicksburg Fire Department, said there was a man in the home at the time it collapsed. The man was uninjured.

Williams said Engine 6 and Battalion 1 from the Vicksburg Fire Department responded along with the city’s gas department, police department and a team with Entergy who disconnected the power to the home.

He said the soil around the back side of the home appeared to have given way, leading to the collapse.