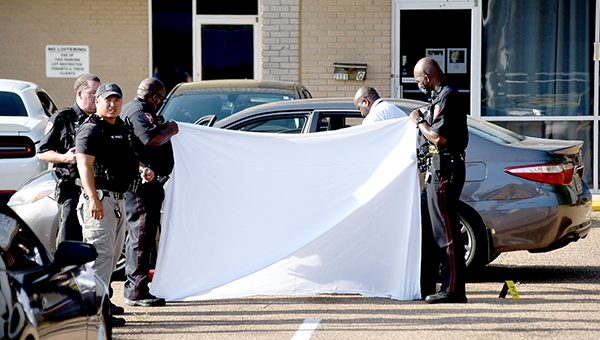 Officers with the Vicksburg Police Department use a sheet to obscure the scene of a murder Wednesday afternoon on the 2100 block of Clay Street. Christopher Johnson, 35, of Vicksburg, was declared dead at the scene. (Courtland Wells/The Vicksburg Post)

Moore confirmed that a male, identified as Christopher Johnson, 37, of Vicksburg, was shot and killed and that a female suspect is in custody. He said the woman, identified as 35-year-old Talisha Butler, contacted authorities shortly after the shooting to report she had shot Johnson.

Moore was then contacted and met Butler, who was a passenger in a car, on Washington Street. From there, she was taken to the Vicksburg Police Department, where she was interviewed and later charged with murder. She is scheduled to make her initial court appearance in Vicksburg Municipal Court Thursday.

Two additional people who are alleged to be involved in this homicide have been detained and transported to the police station for questioning.

The parking lot of Blackburn Motors on North Frontage Road will be transformed into a drive-in movie Friday night as... read more