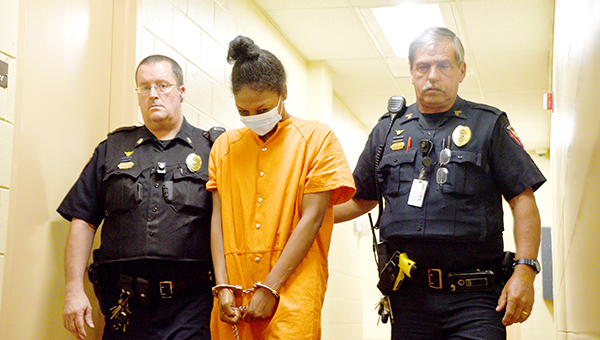 Talisha Butler is escorted to the municipal courtroom Thursday at the Vicksburg Police Department. Butler was charged with murder in the shooting death Wednesday of Christopher Johnson. (Courtland Wells/The Vicksburg Post)

Bond on murder suspect reduced to $50K during Friday hearing

A Vicksburg woman charged in the shooting death of a Vicksburg man Wednesday is no longer in custody.

During a hearing on Friday, County Judge Marcie Southerland reduced the bond on Talisha Butler, 37, from the $500,000 that was set Thursday in Vicksburg Municipal Court to $50,000. Following the hearing, Butler posted bond and is no longer being housed in the Warren County Jail.

Butler is charged with the murder of Christoper Johnson, 37, of Vicksburg, Wednesday in a parking lot in the 2100 block of Clay Street.

Shortly after 5:30 p.m. Wednesday, first responders were dispatched to the scene for a report of a man shot in the chest.

After Butler called 911, Moore was then contacted and met Butler, who was a passenger in a car on Washington Street. From there, she was taken to the Vicksburg Police Department, where she was interviewed and later charged with murder.