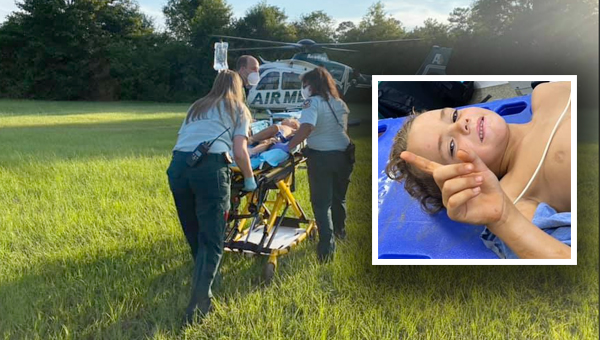 Vicksburg motocross racer Rudy Reeves, 7, wrecked at a racing event Saturday in Louisiana. He was airlifted to a hospital in Baton Rouge with a dislocated hip. The family shared an update on Facebook Saturday night — along with these photographs — to report the young man is doing well. (Reeves family photos/Facebook)

Local motocross racer, Rudy Reeves, 7, had an accident at a racing event in Louisiana Saturday, forcing medical officials to airlift the young man to a hospital in Baton Rouge.

“Well, we want to thank everyone for your prayers! Rudy took a bad fall today and dislocate his hip. He was airlifted to Baton Rouge and is doing great,” Rudy’s father, Tucker, said. “They were able to get his hip set without any issues. He will be out for 6 weeks or so to make sure he heals correct! We will miss Loretta’s this year but we will be healthy next year. Thanks again for the prayers!”

Rudy, a second-grade student at Bowmar Elementary School, finished sixth at the AMA Motocross Super Regionals in Blountville, Tenn. in June to qualify for the 2020 AMA National Motocross Championship in early August.

MDOT makes plans to repair I-20 bridges in Vicksburg

The Mississippi Department of Transportation has plans to repair and improve the five bridges on Interstate 20 in Vicksburg. According... read more