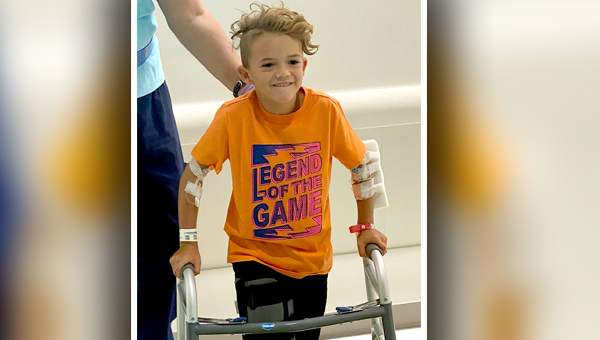 Rudy Reeves, 7, uses a walker Sunday morning as he goes through therapy at a hospital in Baton Rouge. Rudy was injured in a motocross accident Saturday in Louisiana. Rudy's father, Tucker, said Rudy dislocated his hip, but he should fully recover in a few weeks.

Local motocross racer Rudy Reeves, 7, is on his way home and recovering following an accident during a training ride Saturday in Louisiana.

Following the accident, Reeves was airlifted to a hospital in Baton Rouge for a dislocated hip.

“Well, we want to thank everyone for your prayers! Rudy took a bad fall today and dislocate his hip. He was airlifted to Baton Rouge and is doing great,” Rudy’s father, Tucker, said. “They were able to get his hip set without any issues. He will be out for 6 weeks or so to make sure he heals correct! We will miss Loretta’s this year but we will be healthy next year. Thanks again for the prayers!”

Rudy, a second-grade student at Bowmar Elementary School, finished sixth at the AMA Motocross Super Regionals in Blountville, Tenn., in June to qualify for the 2020 AMA National Motocross Championship in early August.

Sunday morning, Tucker posted an update, showing pictures of Rudy using a walker as he was going through therapy.

“Rudy Reeves has Risen!! He is one tuff little guy!! Hip popped back in great and just has some stretched muscles to get healed up now,” Tucker wrote. “Thank you everyone that prayed for him! Thank you Jesus Christ for the blessing!”

In a message to The Post, Tucker said doctors projected Rudy’s recovery time at four weeks, and it will be a number of weeks before Rudy will be able to get back to riding.

One wreck injures mother and child, while another wreck leads to arrest

A Warren County man was cited for two traffic violations after he left the scene of a wreck on Halls... read more