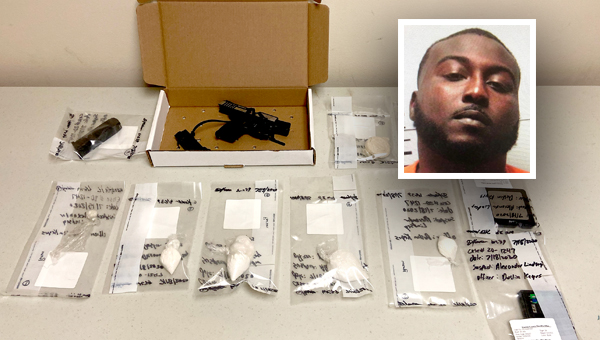 A Vicksburg man arrested for drug charges and eluding authorities in an early Saturday morning chase is now facing an $85,000 bond following his initial hearing Monday.

Warren County Sheriff Martin Pace said Alexander Jamaal Lindsey, 28, who has served time for drug-related charges, was found in possession of a firearm and drugs valued at nearly $10,000 during an incident Saturday morning that came to an end near the intersection of Bellaire Drive and Indiana Avenue.

Pace said just before 1 a.m. Saturday, K-9 deputy Dustin Keyes attempted to stop the Honda Accord Lindsey was driving in the 4900 block of Halls Ferry Road.

Lindsey did not stop, leading to a chase that went from Halls Ferry to Porters Chapel Road, through Chapel Hill Subdivision and then to the intersection of Bellaire Drive and Indiana Avenue where Vicksburg Police detectives Jeff Merritt and Donnie Heggins were approaching the intersection.

The Honda crashed into a ditch and three people inside exited the car, including Lindsey, and fled on foot. Lindsey was apprehended at the scene.

“The Vicksburg Police Department was crucial in this arrest and we truly appreciate their support,” Pace said.  He said that Merrit and Heggins were actually the first two to make contact with Lindsey and took him into custody.

While he was being taken into custody, officers found Lindsey with a loaded .40 caliber handgun, cocaine and crystal methamphetamine with a street value of nearly $10,000. After searching the vehicle, Pace said the total amount of drugs found came to 117.5 grams of cocaine with a street value of $7,000 and just under 2 ounces of crystal methamphetamine valued at $3,000. Two electronic scales used to weigh the drugs were also found.

In addition to the drugs discovered and the gun confiscated, Pace said the department is now seizing the vehicle.

Pace said officers searched the area until well into daylight but were unable to find the other two people. The investigation is continuing.

Because the car’s airbag deployed during the wreck, Lindsey was taken to Merit Health River Region, where he was examined in the hospital emergency room and released into the custody of the Sheriff’s Department.