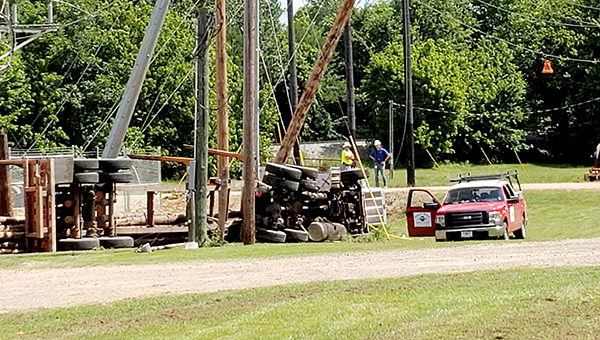 A log truck overturned on Highway 3 Tuesday morning, damaging power poles on the side of the road. The driver received minor injuries and was transported to Merit Health River Region. (John Surratt/The Vicksburg Post)

At around 10 a.m., emergency units were dispatched to Highway 3 for the report of an overturned 18-wheeler. According to Mississippi Highway Patrol reports, the driver lost control of the truck, which went off the left side of the road, rolled over onto its side and collided with multiple utility poles.

The accident caused significant damage to the power lines and high-voltage lines in the area and the utility poles.

The driver of the log truck remained in the vehicle as crews worked to disconnect the power and remove power lines that had entangled the truck.

The driver was transported to Merit Health River Region.

“He was not trapped but he did not need to get out of the truck with the powerlines on it until we were sure the powerlines were de-energized,” Warren County fire coordinator Jerry Briggs said.

He said first responders were able to contact the driver’s wife to get his cell phone number and were able to talk with the driver while he was in the truck to let him know workers were going to get him out.

“He was conscious and alert and moving around,” Briggs said. “We just didn’t want him getting out until the power lines were off.”

Pace said crews with the Yazoo Valley Electric Power Association and Entergy assessed the damage caused to two power poles. The road closed while those poles were assessed.

The Mississippi Highway Patrol is now on the scene and investigating the accident.