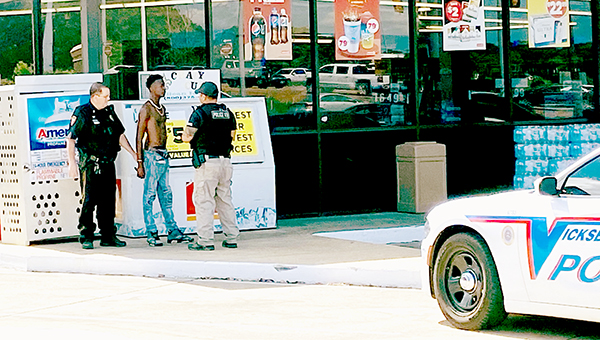 A manhunt Monday afternoon netted the arrest of one suspect connected to an auto burglary at USA Pawn on Warrenton Road.

Two other individuals connected to the auto burglary remain at large.

The Vicksburg Police Department announced the arrest of Emajjun Gibson, 18, of Hermanville, in connection to the theft of a rifle stolen from a truck at the pawn shop.

At 2:44 p.m., officers were dispatched to the Super 8 Hotel, 4127 I-20 Frontage Road, in reference to the earlier burglary. The victim reported a .243 rifle had been stolen from the truck and the suspects had been seen near the hotel.

He has been charged with one count of auto burglary and is being held until he makes his initial appearance in Vicksburg Municipal Court Wednesday.

A Vicksburg man arrested for drug charges and eluding authorities in an early Saturday morning chase is now facing an... read more