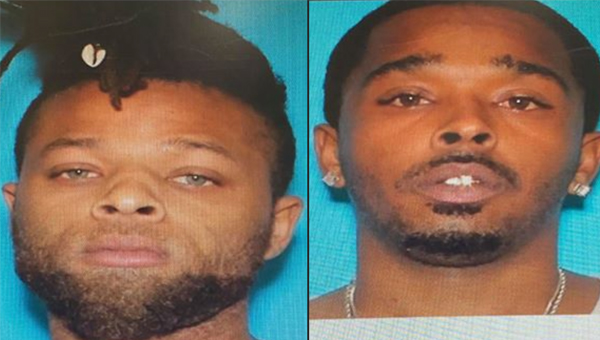 Marcus Bridges and Desmond Fortenberry were identified as the inmates who escaped from the Jefferson Davis Jail Thursday night.

A man wanted for murder in Jefferson Davis County, who was captured on July 14 hiding behind a dumpster in Vicksburg, has escaped jail.

Desmond Fortenberry, who is charged in the connection of a November murder in Prentiss, was one of two inmates to escape the Jefferson Davis County Jail Thursday night at around 8:30 p.m. The other inmate who escaped was identified as Marcus Bridges.

Prentiss Mayor Charley Dumas sent out alerts on social media warning residents in his city to take precautions as law enforcement officials have identified the two as “extremely dangerous.” He says their direction of travel is not known. Dumas advises residents to take necessary precautions if you live in the area.

“Further details are unknown at this time, other than based on previous histories of these two, they should be considered extremely dangerous,” the Lawrence County Sheriff’s Office said in a post on its Facebook page. “If these two are seen, contact your local law enforcement agency immediately.”

As for Fortenberry, his capture in Vicksburg on July 14, was surprising as it was not known of any connection the felon had to Vicksburg.

Details on Bridges, including his home address or what he has been charged with prior to Thursday’s escape, were not available.

Below is a story The Post wrote about Fortenberry’s arrest on July 14 and the odd details on how he was released from state custody. The Post will update the story of Demond and Bridges’ escape once more information is available.

A man wanted in connection with a murder in Jefferson Davis County was found Tuesday evening in Vicksburg. While the situation ended without incident, there is some question as to how and why the suspect was even able to make to Vicksburg in the first place.

Just after 6:30 p.m. Tuesday, officers with the Vicksburg Police Department, acting on information received from an outside agency, responded to an area on North Washington Street near First East Street.

Once there, they found Desmond Fortenberry, 28, of Silver Creek, who had been charged in November with murder in Prentiss, hiding behind a trash dumpster.

He was taken into custody and transported to Jefferson Davis County Tuesday evening.

But the story of why Fortenberry was in Vicksburg, or even out of jail at all, is unclear.

On Nov. 20, multiple gunshots were reported in an area behind the Post Office in Prentiss. Shortly after, the Prentiss Police Department learned that a victim had been transported to a nearby emergency room.

According to a report in The Prentiss Headlight, when detectives arrived at the emergency room, the victim, Carlos Taylor, identified Fortenberry as the shooter. Taylor, who had been shot multiple times in the chest, side and neck, later died from his injuries.

Three days later, Fortenberry was taken into custody by Lamar County authorities in Hattiesburg. He was then held in the Jefferson Davis County Jail.

But even with a murder charge pending, merely holding him in custody was not cut and dry.

Fortenberry was arrested in 2015 in Forrest County for gang-related activity and sentenced for those crimes in April 2018. At the time of his sentencing, Fortenberry was given three years in prison and five years of probation.

He was released from prison on parole beginning October 2018, nearly 13 months before he was arrested in connection with the murder of Carlos Taylor.

But in June, Prentiss officials and Jefferson Davis County officials did not know Fortenberry had been released without their holds being enforced.

The Mississippi Department of Corrections would not confirm whether Fortenberry had been in touch with his parole officer after being released in June on probation.

When it was discovered in late June that Fortenberry was no longer in state custody, a bench warrant was issued in Jefferson Davis County for his arrest. That search ended Tuesday in Vicksburg.

Officials with the Prentiss Police Department and the Jefferson Davis County Sheriff’s Department declined to comment on what might have happened with the holds they had placed on Fortenberry.

“We really want to thank the Vicksburg Police Department, the U.S. Marshals and other agencies who have helped in capturing this individual,” Browning said. He also said Fortenberry’s connection to Vicksburg did include an unidentified woman who Browning said very well may not have known his criminal past and will not face any harboring charges.